Asserting that infrastructure is a key priority of his government, Prime Minister Narendra Modi today said Rs 3 lakh crore has been spent on laying a network of 28,000 km of highways.

The Eastern Peripheral Expressway (EPE) is also the country's first highway to be lit by solar power and at every 500 metres, as there are eight solar power plants on this Expressway, with a capacity of 4000 KW (4 megawatt) for lighting of the underpasses and running solar pumps for watering plants and also having arrangement for rainwater harvesting on both sides at every 500 meters and there is drip irrigation for plants all along the expressway.

Another special feature of the Expressway is that it has a closed tolling system in which toll will be collected only for the distance travelled and not for the entire length. Toll plazas will be
equipped with Electronic Toll Collection (ETC) system for faster toll collection and Weigh-in-Motion (WIMs) equipment have been installed at all 30 entry points of the Expressway to stop entry of over-loaded vehicles.

Modi also inaugurated the Digital Art Gallery of National Highway Authority of India (NHAI) at the toll plaza in Jakhauli village of Sonipat.

Earlier, at the main entrance of the Gallery,  Modi viewed the map of KGP Expressway and saw as how the KGP and KMP would change the picture of national capital Delhi and National Capita Region (NCR) area.

Later, Modi went around the Digital Art Gallery where he was informed in detail about the journey right from the begging of construction work of KGP Expressway till is completion by using 3D technique.

These included acquisition of land for the Expressway, redressal of grievances related to farmers, beginning of ground work on the Expressway, strategy for the timely completion of work, technique used in the construction work, use of solar energy, plantation and benefits of the Expressway for the people of Delhi and other areas.

Secretary of Ministry of Road Transport and Highways Yudhvir Singh Malik apprised Modi that the construction of this Highway has been completed in 500 days instead of 910 days. This is a record in
itself and would prove to be a milestone in the field of highway construction. He informed that the
Kundli-Ghaziabad-Palwal (KGP) Expressway (Eastern Peripheral Expressway) has been constructed by NHAI to ease the traffic congestion in Delhi.

A sum of Rs 5,763 crore has been spent on this six-lane and 135 kilometers long highway, he said adding that this is the country’s first access control highway and the vehicle would be charged toll on the basis of distance covered. He said that arrangement of rain water harvesting has been made at every 500 meters on the both sides of this Highway. The entire Highway is powered by solar energy, he added. 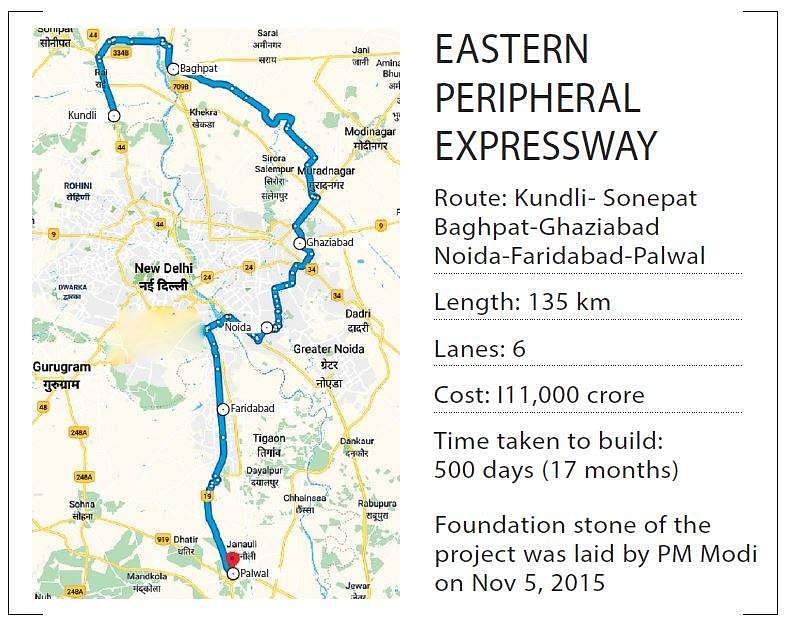 The 36 famous monuments depicting India’s rich culture and heritage like India Gate, Gate Way of India, Ashoka’s Pillar have been set up on both sides of this expressway. The Digital Art Gallery
has been constructed by NHAI to acquaint the coming generation and the visitors about the technique used in the construction of India’s first access control highway, obstacles faced in the process and other works. Eighteen displays have been prepared in the gallery in which all information concerning the construction of the Highway has been incorporated.

This information would not only enhance the knowledge of people but also prove to be beneficial for the students of engineering and research.

Haryana Chief Minister, Manohar Lal Khattar said that the  Prime Minister, Narendra Modi will also  dedicate major projects including Western Peripheral Expressway, Metro line from Delhi to Bahadurgarh, Haryana Vishwakarma Skill Development University as he will be requested soon to spare time for the inauguration of these projects.

Khattar said that soon Western Peripheral Expressway would also be completed and the total length of 270 kms road of these two Expressways would be the longest road in any country of the world.

He said that the Central Government has completed four years on May 26 and entered into fifth year. During the period, massive developmental works have been undertaken bringing changes in the system.

In the fifth year, the accelerated pace of development would get new direction with the coordinated and dedicated efforts of all of us, he assured.

He said that the foundation stone of Chhachhrauli Bridge had been laid and its tenders would be opened by coming June 5. He said that in the last three-and-a-half-years, a sum of Rs 35,000 crore was
approved for nine national highways for strengthening infrastructure sector in Haryana. He said that with the construction of both Eastern and Western Peripheral Expressway, the people of Delhi would get a big relief from traffic congestion and this expressway would play an important link between North India and South India. He said that these Expressways would induce development and also open opportunities of investments.

He said that the Union Minister for Road Transport and Highways,  Nitin Gadkari has said that in the next 10-15 days, work on Dwarka Expressway that links Delhi and Haryana would begin. He said that the expressway would be constructed at the cost of Rs 7,000 crore.

Now we are on Telegram too. Follow us for updates
TAGS
Narendra Modi Eastern Peripheral Expressway