According to government data, from 2015 to February this year, 299 cases were handed over to the agency by the Supreme Court.

NEW DELHI: Almost 65 per cent of the cases being investigated by the Central Bureau of Investigation since 2015 are still awaiting closure. According to government data,  from 2015 to February this year, 299 cases were handed over to the agency by the Supreme Court. Of these, CBI filed charge sheets in 107 cases—103 in 2015 and four in 2016—while the other cases are under ‘active investigation’. The Supreme Court gave over 191 cases, including Preliminary Enquiry (PE) and Regular Case (RC), in 2015, and 14 cases in 2016 to the CBI.

In August last year, while asking the CBI to file a status report in a coal scam case, a three-judge bench headed by Justice Madan B Lokur observed that “We have been requesting the CBI from time to time to expedite the ongoing investigations, but it does not seem to come to an end.” In March last year, the CBI filed a case against its own ex-chief, Ranjit Sinha, who was accused of influencing the probe into the coal block allocation scam during his tenure as the agency’s director.

Similarly, it registered 121 cases on references received from state governments from 2015 to February 2018. But only 36 charge sheets have been filed while 85 cases were under investigation till February this year.

In a recent reply to Parliament, instead of blaming shoddy investigation and lack of trained manpower, Dr Jitendra Singh, minister of state for the Department of Personnel and Training, said, “In some cases, investigation requires scrutiny of voluminous documents and examination of large number of witnesses. Investigations has to be done in foreign countries for which Letters Rogatory have to be executed, which is a time-consuming process.” 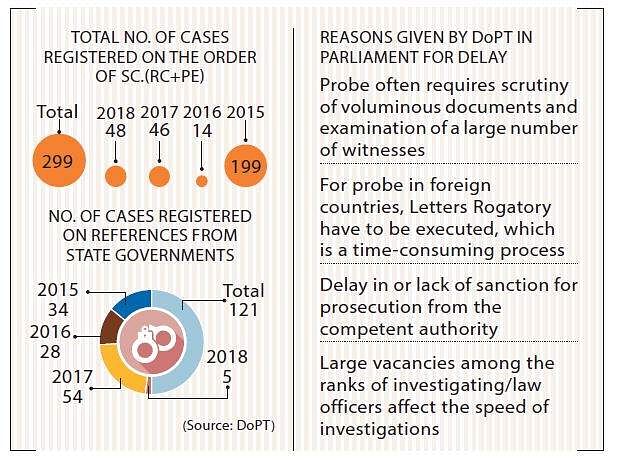 Now we are on Telegram too. Follow us for updates
TAGS
CBI Central Bureau of Investigation