Protesting fuel price hike, farmers not to supply milk, vegetables in cities across India from June 1 to 10

If one has to buy any of these commodities one will be have to go to the villages and buy them at the rates farmers demand. 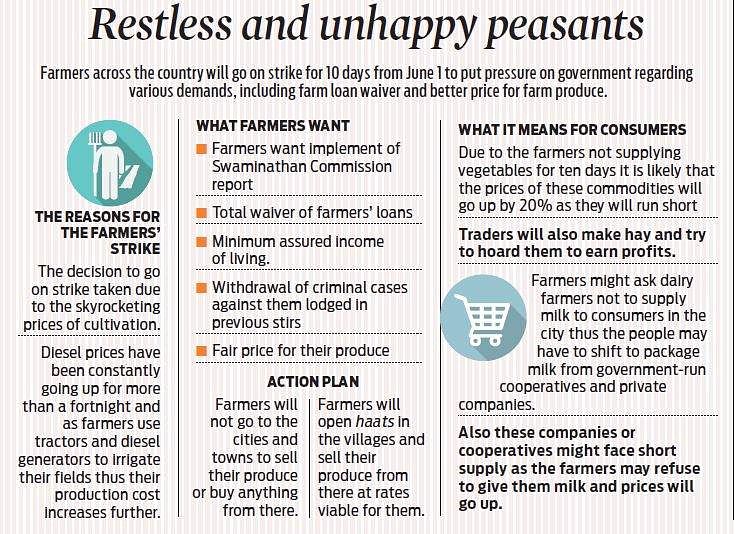 The farmers have been told to open farmers huts in the villages and sell their produce from their at the rates which are viable for them.

CHANDIGARH: From June 1 to 10 the farmers will not be supplying milk and vegetables to the urban areas across the country including Punjab. If one has to buy any of these commodities one will have to go to the villages and buy them at the rates farmers demand. This decision has been taken under the slogan, " Villages are closed and farmers are on leave."

Talking with New Indian Express, Balbir Singh Rajewal, President of Bhartiya Kisan Union (BKU) Punjab Unit said, "this decision has been taken by farmers association and unions of all the states due to the skyrocketing cultivation prices and the union government is doing nothing to control them, thus now farmers have no option left. See the diesel prices have been constantly going up for the last more than a fortnight. The farmers use tractors and diesel generators to irrigate their fields thus their production cost like further increase."

"Under this slogan, "Villages are closed and farmers are on leave" we have told the farmers not to go to the cities and towns for any work or buying of selling anything. If they want to buy any anything they should buy from the fellow villager or farmer. If they want to sell their vegetables or any other produce or milk they should sell them in the village.

The people from the cities and towns are welcome they can come in the respective villages nearby their places and buy whatever they can from the farmers be it vegetables or milk or any other commodity.

The farmers have been told to open farmers huts in the villages and sell their produce from their at the rates which are viable for them. Still the farmers will make a profit and the people from the cities will also benefit as they will still get the vegetable and milk at cheaper rates, " says Rajewal.

He adds that the in summers milk is in short supply thus the rates go up but this time the Verka is giving Rs 7 per litre less to farmers at Rs 22 per litre and sells the same in the market at Rs 45 per litre.

"As far as vegetables are concerned tomatoes and pumpkins are being sold by the farmer at One rupee per kg, onion at 50 paisa per kg and a farmer sold 35 kg capsicum for Rs 25. While another farmer sold a lot of chillies for Rs 1700 and of this he paid Rs 1450 as labour charges besides his fuel cost thus did not get even his cost price," says Rajewal.

He says this slogan given by farmers stopping of milk and vegetables sullies is a nationwide agitation by farmers. "Our main demands is to implement Swaminathan Commission report, total farmers loans waivers and give the farmer a minimum assured income of living, " Rajewal says and adds that the other slogan given by our fellow farmers across the country is " Farmers of India-One Family One Voice."

On Tuesday hundreds of farmers came out with their tractors in Samrala on the Ludhiana-Chandigarh highway in protest over the rising diesel prices. The farmers also handed a memorandum addressed to the Prime Minister to the sub-divisional magistrate.

Now we are on Telegram too. Follow us for updates
TAGS
farmers Fuel price hike farmers protest Bhartiya Kisan Union