The opposition passed the test of acceptance of its grand alliance by wresting both Kairana Lok Sabha and Noorpur Assembly seats by consolidating anti-BJP votes. 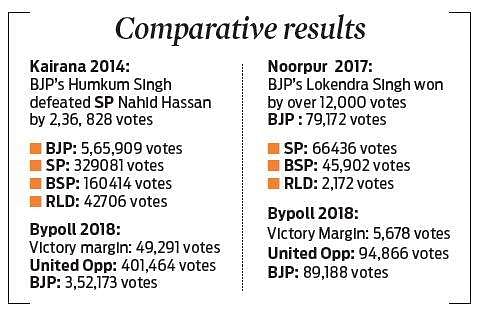 LUCKNOW: Serving a second a big blow to the ruling BJP in western UP after Gorakhpur and Phulpur defeat, the opposition passed the test of acceptance of its grand alliance by wresting both Kairana Lok Sabha and Noorpur Assembly seats by consolidating anti-BJP votes under one umbrella here on Thursday.

Apart from sending ominous signs for ruling BJP in the run-up to 2019 general elections, the defeats have substantiated that the debilitating effect of opposition unity, which was cobbled up during Gorakhpur and Phulpur Lok Sabha byelections two months back, has continued in Kairana and Noorpur stopping the saffron poll juggernaut.

The repoll to the two western UP seats were necessitated due to the death of sitting BJP MP Humkum Singh in Kairana and MLA Lokendra Singh in Noorpur. Despite coming to power with a humungous majority in 2017, the BJP failed to hold its fort tasting back-to-back four defeats in UP. Neither the sympathy factor nor its efforts to make it a straight Hindu-Muslim fight, could work for it in Kairana and Noorpur which it had won by good margins in 2014 and 2017.

On the contrary, the united opposition, comprising SP, BSP, Congress, RLD, Congress and others focused on Muslims, Dalits and Jats equations and won their support successfully while the BJP kept aiming for the upper caste Hindus, the OBCs, and non-Jatav Dalits.

In Kairana, out of total 9,38,742 votes polled, RLD’s Tabsassum Hassan got 4,81,182 votes and BJP’s Mriganka Singh 4,36,564 votes. In fact, Kairana Lok Sabha constituency comprises five assembly seats – Kairana, Shamli, Thanabhawan, Nakud and Gangoh. Out of these five, BJP could win only in Shamli and Kairana with a margin of 414 and 14,203 votes but lost in the remaining three. In Thanabhawan, it lost by 16,336 votes. In Gangoh and Nakud, which fall in Saharanpur district, BJP lost by 12,263 and 28,117 votes respectively.

In Noorpur, the contest was close and victory margin was slender. While opposition’s Naeemul Hassan got 94,866 votes against BJP’s Avni Singh polled 89,188. The margin of Hasan’s victory was just 5,678 votes well ascribed to grand alliance.

However, the political pundits view bypoll results as failure of BJP’s bid to polarize polls. “It is rather the sugarcane crisis in western UP which has gone against BJP candidates on both seats,” said a senior BJP leader on condition of anonymity. “BJP had cashed in on 2103 Muzaffarnagar riots and exodus issue in 2014, but this time, non-payment of dues by sugarcane mills appear to have pushed the communal feelings back,” said a political observer.

Even more PM Modi's appearance in Baghpat, just a day ahead of polling, could not do turn fortunes of his party. Though a small bypoll, the winner of which will have a short term in Lok Sabha, Kairana result has a huge message for both the opposition and the BJP. While for Opposition, grand alliance seems to be the only way ahead, the saffron party needs to revisit its 2019 strategy.

Now we are on Telegram too. Follow us for updates
TAGS
BJP Kairana RLD bypoll results United opposition Noorpur