NEW DELHI: Around 400 paramilitary personnel have been killed in last three years due to cross-firing along the India-Pakistan border and to terrorist and insurgency violence in the country, officials said on Wednesday.  Maximum casualties have been reported from the Border Security Force (BSF) which secures India’s international Borders with Pakistan and Bangladesh.

As many as 167 personnel of the border guarding force were killed between 2015 and 2017. The Central Reserve Police Force (CRPF) has lost 103 personnel in the last three years, mostly while fighting Naxals and militancy in Jammu and Kashmir, a Home Ministry, official said.

Altogether, 35 personnel of the Assam Rifles, which guards the Indo-Myanmar border and fights militants in the northeast, were killed in action in the last three years. 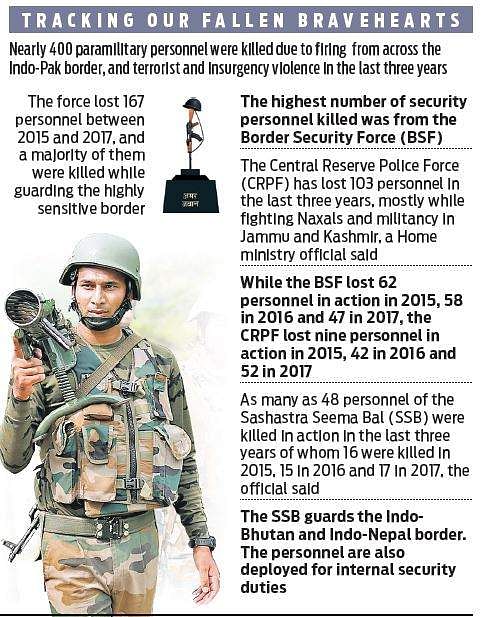 Now we are on Telegram too. Follow us for updates
TAGS
Jawans Bangladesh Pakistan