After regularly receiving complaints from people, the police have launched a drive against the stunt bikers.

University campus under CCTV surveillance
In view of near-daily protests at the University of Kashmir campus at Hazratbal in Srinagar, the varsity authorities have installed CCTVs at various places, including the entry points, to keep watch on the movement of students and others entering the campus. After every civilian or militant killing, the university students stage a protest to condemn the killing. The students apprehend that by installing the CCTVs, the varsity authorities are playing into the hands of police officers, who want to keep track of students in the campus.

Canine attacks
With canine attacks on the rise in Srinagar, the J&K High Court has directed Srinagar Municipal Corporation (SMC) to furnish details regarding the number of dogs sterilized last month in Srinagar. Hearing a Public Interest Litigation by advocate A R Hanjura, a division bench of Chief Justice Gita Mittal and Alok Aradhe directed the SMC to submit a status report about sterilization of dogs by October 19. There has been an increase in dog attacks in Srinagar and many people, including kids and the elderly,  have been bitten by the canines. According to SMC officials, there are about 40,000 dogs in Srinagar city, and they are being sterilized to reduce their numbers. They said the government had set up an Animal Birth Control and Rabies Center in the outskirts of Srinagar. 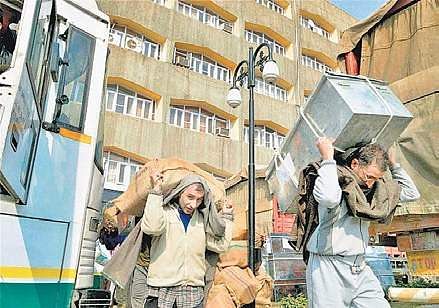 As Kashmir Valley braces for winter, the capital and seat of governance in Jammu and Kashmir would be shifting from summer capital Srinagar to winter capital Jammu as part of the half-yearly Durbar move. The Civil Secretariat, the seat of the Jammu and Kashmir government, along with other offices, would close on October 26 and reopen in Jammu on November 5. The Governor, his advisors, the chief secretary and other top officials would work from Jammu from the latter date. The tradition of Durbar Move was started during Dogra rule in 1872 by Maharaja Gulab Singh and continues even today. A special allowance of D15,000 would be paid and disbursed in advance to every employee involved in the Durbar move.  Besides, the salary for October for all employees working in offices that would be shifting to Jammu shall be drawn on October 22.

Drive against stunt bikers
After regularly receiving complaints from people, the police have launched a drive against the stunt bikers. They have intensified vigil at the points where the bikers perform dangerous stunts. During the vigil at one such point, at Boulevard Road, police arrested two bikers who were performing dangerous stunts on bikes. The bikers were performing stunts on modified motorbikes, causing concern among people. A police official said police had intensified checking at some points to ensure there was no speeding or bike stunts. He said nobody would be allowed to endanger the life of road users by performing dangerous stunts.

Fayaz wani
Our correspondent in Jammu and Kashmir
fayazwani123@gmail.com