NEW DELHI: IT has been nine months since the Ministry of Consumer Affairs implemented the Packaged Commodity Rules 2017, effective from January 1, 2018, making it mandatory for e-commerce companies to display the MRP and best before date of all packaged products for human consumption listed on their site. The move was aimed at making food product purchases more transparent on e-commerce sites and to protect the interest of consumers. 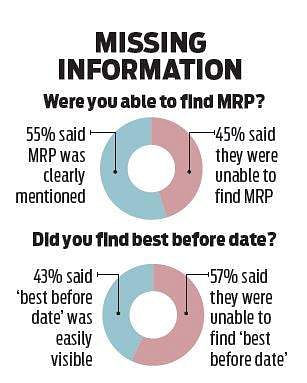 Online community platform LocalCircles conducted a survey to find out the level of compliance by e-commerce sites on this issue. The survey received more than 15,000 responses. The first question asked consumers if they could find the MRP on products on e-commerce sites in the last three months. Forty-five per cent of the respondents said they were unable to find the MRP, while 55 per cent said the MRP was clearly mentioned.

Fifty-seven per cent of the respondents said that they were unable to find the best before date on food products on e-commerce sites or apps in the last three months, while 43 per cent said the date was easily visible. Compliance on this issue has improved from 31 per cent after the first month to 43 per cent after nine months.

Now we are on Telegram too. Follow us for updates
TAGS
e-commerce platform displaying MRP Best before date Packaged Commodity Rules 2017