Chhattisgarh, Maharashtra and West Bengal are among the states that did well.

About one lakh patients have benefitted from the scheme ever since its launch by Prime Minister Narendra Modi in Ranchi on September 23. The health insurance scheme provides cashless hospitalisation facilities for over 1,300 surgeries and medical procedures to about 50 crore most vulnerable Indians. Data reveal Gujarat, the home state of PM Modi, saw about 28,000 patients availing benefit of the scheme. Tamil Nadu came second with 23,365 beneficiaries in the last one month.

Chhattisgarh, Maharashtra and West Bengal are among the states that did well. But, Bihar, Goa and Uttarakhand are struggling to get a kick-start. Officials attributed lack of infrastructure and administrative capacity in some states to the scheme not picking up pace there. “The states which had successful health schemes running from before have took off really well, while some others are struggling. But, it’s just the beginning and we are sure that all states will be able to take the programme forward in a good way,” said Indu Bhushan, CEO of the National Health Agency, which is executing the scheme.

Oral and maxillofacial surgery, general medicine, ophthalmology, obstetrics and gynaecology, and general surgery are the top five specialities in demand, according to government data. Also, in last one month, the procedures that maximum patients are undergoing include cataract surgeries, root canal treatment, fixed partial denture, single tooth capping and normal delivery. Of the total 14,020 hospitals empanelled for the health insurance scheme, 7,736 are private hospitals. The remaining 6,284 are public hospitals. 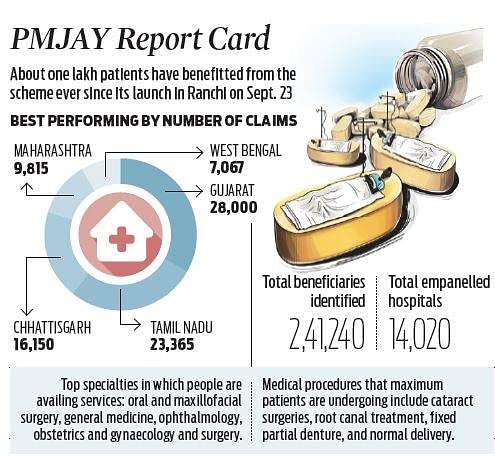 Now we are on Telegram too. Follow us for updates
TAGS
PMJAY Pradhan Mantri Jan Aarogya Narendra Modi