The 16 coaches of T-18, air-conditioned chair car type have been manufactured at a cost of `100 crore to run at 160 kmph per hour.

CHENNAI: The Integral Coach Factory here is all set to roll out India’s first engine-less indigenously manufactured semi high speed Train 18 on October 29. The exterior of Train 18 coaches has been given a colour scheme of white and dark blue, while the interiors sport a swanky look with pink colour.

The 16 coaches of T-18, air-conditioned chair car type have been manufactured at a cost of Rs 100 crore to run at 160 kmph per hour. The train built under Make In India programme, with state-of -the-art facilities will offer a host of amenities for rail passengers, ICF officials said.

ICF General Manager Sudhanshu Mani said the train will be a huge leap in coach manufacturing in India. “The train set will have driving cabs at both ends which will eliminate loco reversal at terminals. The train powered by traction motors fitted underneath each coach to make them self-propelled with quicker acceleration and deceleration. As a result, travel time will be lesser compared to regular loco hauled trains,” he said. 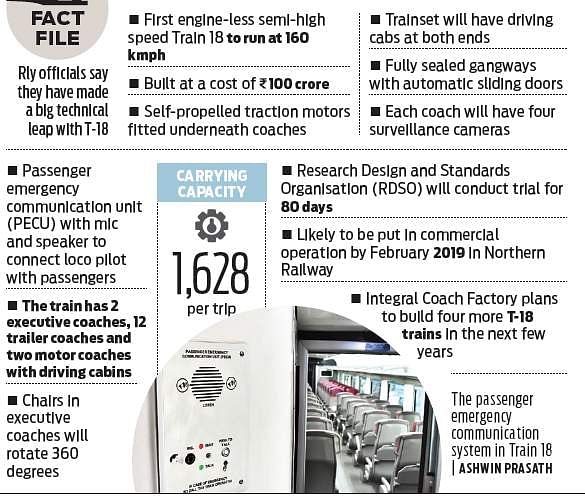 Explaining further, the official said all coaches are inter-connected with fully sealed gangways and the automatic sliding doors cannot be opened when the train is in motion. “The train will have on board Wi-Fi, diffused LED lighting, infotainment, GPS-based passenger information system (PIS), wide windows for panoramic view and ergonomically designed seats,” he said. The ICF has also introduced bio-vacuum toilets. “Each coach has four surveillance cameras. In addition, passenger emergency communication unit (PECU) has been provided with mike and speaker connected with loco pilot. In the event of emergencies, passengers can call the loco pilots,” he added.

The train has two executive coaches, 12 trailer coaches and two motor coaches with driving cabins. The chairs in executive coaches will rotate 360 degrees. The carrying capacity of the train in 1,628 per trip. The general manager said ICF will roll out another formation of train 18 by February 2019.