The action finally came on Saturday in the form of a first information report on alleged irregularities in a land deal in Sector 83, Gurugram.

NEW DELHI: Ever since the Narendra Modi government took oath of office in 2014 and wrested power in Haryana a few months later, it was always a question of when and not whether the BJP will go after Congress leader Sonia Gandhi’s son-in-law Robert Vadra.

The action finally came on Saturday in the form of a first information report on alleged irregularities in a land deal in Sector 83, Gurugram. 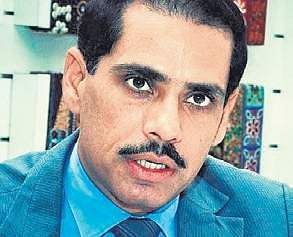 Along with Vadra, the then Haryana chief minister Bhupinder Singh Hooda, real estate giant DLF and realty firm Onkareshwar Properties, too, were booked by the Haryana police. Various sections of the IPC were invoked against Vadra and Hooda, including 420 (cheating), 120 B (criminal conspiracy), 467 (forgery), 468 (forgery for the purpose of cheating), 471 (using as genuine a forged document), and Section 13 of the Prevention of Corruption Act.

The FIR was based on a complaint filed by Surinder Sharma, a resident of Taruh in Nuh district, alleging fraudulent land transaction in Shikohpur, Sector 83, Gurugram in 2008. It claimed Vadra’s firm, Skylight Hospitality, was registered in 2007 with a capital of just Rs 1 lakh. A year later, on February 12, 2008, Skylight purchased 3.53 acres in Sector 83 through cheque for Rs 7.5 crore from Onkareshwar Properties, a cheque that was never encashed. Sharma alleged that Onkareshwar Properties was a shell company.
And mutation for the land deal was done in Skylight’s favour the very next day.

On March 28, 2008, the town and country planning department issued Skylight LOI/licence to develop a housing colony over 2.701 acres in that parcel of land.

Shortly thereafter, Skylight sold off the land to DLF for a whopping Rs 58 crore.
How did Vadra get the licence to develop a housing colony in record time? It was through Hooda, who also held the charge of the Department of Town and Country Planning at that point in time, the complaint alleged. Rules were bent, as the financial and technical capacity of Skylight, was never assessed, Sharma claimed.

Alleging quid pro quo, the complaint said soon after the Sector 83 deal, DLF was favoured in the allotment of around 350 acres of land for a golf course in Wazirabad in Gurugram, helping it make a Rs 5,000 crore windfall.

Four years after the deal was done, IAS officer Ashok Khemka cancelled the mutation in 2012 for violating norms.

In 2015, the Manohar Lal Khattar-led BJP government had set up the Justice S N Dhingra Commission to probe into the licences given by the Hooda regime for developing real estate in four Guragon villages of Sihi, Shikohpur, Kherki Daula and Sikanderpur Bada.