Two medicos brought laurels to Lucknow by their selection for Dr BC Roy Award in the category of eminent medical teachers.

Muslim women marked the occasion of Raksha Bandhan by tying rakhis to cows at the Lord Shiva temple near Kudiya Ghat in Rumi Gate area. To encourage Muslims to protect cows, BJP MLC Bukkal Nawab organised the event. “We have taken the vow to protect the cow as ‘Gau Raksha’ is important. The time has come to work in this direction,” said the women. They felt that it was a high time that the poor and the farmers were educated about the significance of rearing cows for social, economic, religious, environmental and health benefits. 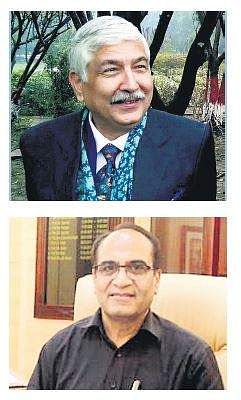 Lucknow will have its own pie to contribute to the prestigious Mars Mission India as two students of APJ Abdul Kalam Technical University (AKTU) have been selected in the astrobiology section of the project. Satyam Pratap Singh and Utkarsh Singhal will be working on the project where the model fulfils the demand of a Rover, weather information and self-protection system of the project.  As per Utkarsh, the duo will be taken to the University of Edinburgh, the UK for a week to test their models in the Mars-like atmosphere. The prototype developed by Satyam will study the environment like temperature and humidity, while Utkarsh’s prototype will try to capture a 360-degree view of Mars.

Two medicos brought laurels to Lucknow by their selection for Dr BC Roy Award in the category of eminent medical teachers. Director, Sanjay Gandhi Post Graduate Institute of Medical Sciences, Prof  Rakesh Kapoor and King George’s Medical University vice-chancellor Prof MLB Bhatt were selected for the prestigious and highest recognition for medical practitioners in India. The award was instituted by the Medical Council of India (MCI) in 1976 in memory of renowned physician and former West Bengal CM Dr Bidhan Chandra Roy. “It is one of the most prestigious awards in the medical fraternity, and I am honoured to have been selected for it,” Prof Rakesh Kapoor said. Prof Bhatt attributed his success to the cooperation of his faculty members at the KGMU.

It was an opportunity to get synchronised with peers, colleagues and teammates in a unique way through ‘Drum Jam’ in the city. Organised by CII and conducted by Young Indians, Lucknow chapter, it was the first session of its kind to distress colleagues while gelling together. The session offered some great amount of listening. It focused on strategising skills, problem-solving approach and creating vibrations for colleagues to rhythmically align with organisational goals. During a two-hour session, members played the drum spontaneously without any prior training. No formal introduction session of participants was organised but once the session began, everyone coordinated with each other and played the drums in a synchronised manner.