In a landmark verdict, the Supreme Court on Thursday legalised gay sex in the country by partially striking down the 158-year-old colonial era law. 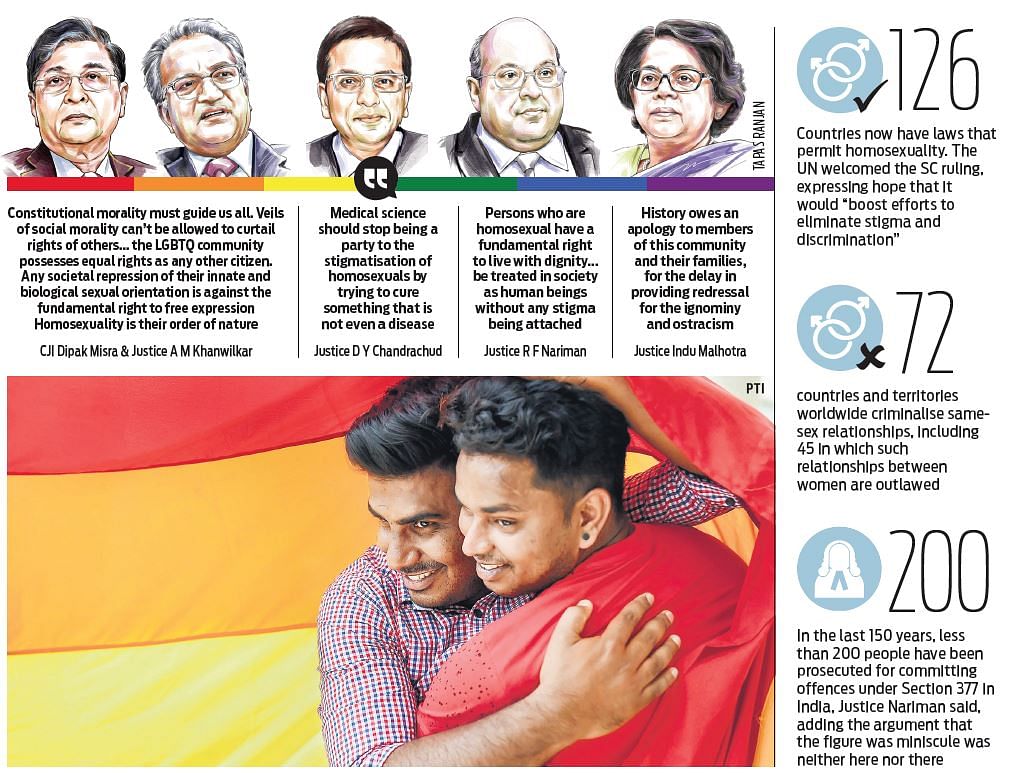 NEW DELHI: In a landmark verdict, the Supreme Court on Thursday legalised gay sex in the country by partially striking down the 158-year-old colonial era law. It held that Section 377 of the Indian Penal Code had become an “odious weapon” to harass the LGBT community subjecting them to discrimination and unequal treatment.

Quoting the German thinker Johann Wolfgang von Goethe, ‘I am what I am, so take me as I am’, Chief Justice Dipak Misra and Justice A M Khanwilkar said, “Individual has sovereignty over his or her body and can surrender autonomy wilfully to another individual and their intimacy in privacy is a matter of their choice and such concept of identity is not only sacred but is also in recognition of the quintessential facet of humanity in a person’s nature.”

After decades-long legal battle, a five-judge bench led by CJI diluted Section 377 saying the law violated the right to equality enshrined in the Constitution.

The court, however, held that Section 377 would apply to unnatural sex involving animals and minor children. Sexual acts without consent will continue to be a crime.

In four concurring opinions, the bench declared the Section as irrational, indefensible and manifestly arbitrary. The judgment will have a wide-ranging economic and social impact on lesbian, gay, bisexual, transgender and queer citizens and will prevent discrimination of gay employees.

Although the ruling will not permit same-sex marriage, it is a step towards greater equality and gives the community their civil and economic rights which were barred till Thursday.

READ THIS: Who are the main petitioners?

The petitioners behind the case include the Naz Foundation, an NGO working on HIV and sexual-health issues; Keshav Suri, executive director of The Lalit Suri Hospitality Group; a group of IIT students; Humsafar Trust; Delhi-based chef Ritu Dalmia; and, Arif Jafar, founder of Bharosa Trust.

Justice Rohinton F Nariman, in his separate opinion, held that homosexuals have a fundamental right to live with dignity. They are entitled to be treated as human beings and should be allowed to imbibe the spirit of fraternity.

“It’s historic,” Anand Grover, a lawyer for the Naz Foundation, said after the verdict was delivered. “It will change the way we see the society, polity and human rights of India.”

In the 493-page ruling, the CJI penned down 166 pages and cited several cases from the South Africa where people’s identities are not of paramount importance. “It is true that the principle of choice can never be absolute under a liberal Constitution and the law restricts one individual’s choice to prevent harm or injury to others,” he said.

The CJI added that sexual orientation was one of the many biological phenomena which is natural and inherent in an individual.

Justice D Y Chandrachud in his 188-page ruling said, “Sexual and gender-based minorities cannot live in fear, if the Constitution has to have a meaning for them on even terms. Sexual orientation has become a target for exploitation, if not blackmail, in a networked and digital age.”

Now we are on Telegram too. Follow us for updates
TAGS
Section 377 sec 377 Sec 377 verdict LGBT Supreme Court