Jaitley, hinting at a possible ‘collusion’, raised questions as to how Hollande’s comments casting aspersion on the Indian government came just two days after a tweet by Rahul.

NEW DELHI: The war of words between Congress president Rahul Gandhi and Finance Minister Arun Jaitley over the Rafale jet deal continued, with both accusing each other of peddling lies.

After Jaitley questioned in a blog post former French President Francois Hollande’s ‘contradictory’ remarks on the deal, saying “truth cannot have two versions”, Rahul slammed the minister saying he specialised in giving a spin to truths or lies. 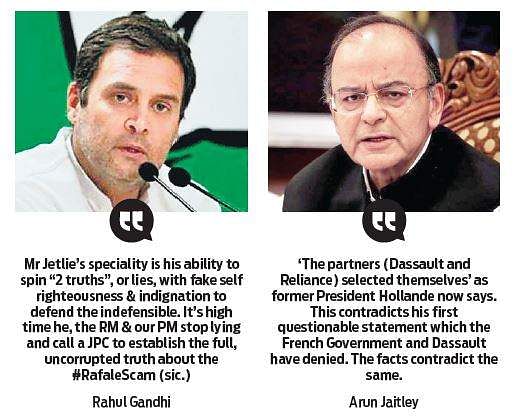 “Mr Jetlie’s speciality is his ability to spin “2 truths”, or lies, with fake self righteousness & indignation to defend the indefensible. It’s high time he, the RM & our PM stop lying and call a JPC to establish the full, uncorrupted truth about the #RafaleScam (sic.),” Rahul tweeted.

His tweet came after Jaitley asserted that neither the Indian nor the French government had any role in the selection of Reliance Defence as the joint venture partner by Dassault Aviation, manufacturer of Rafale jets.

Jaitley, hinting at a possible ‘collusion’, raised questions as to how Hollande’s comments casting aspersion on the Indian government came just two days after a tweet by Rahul. “It is no coincidence that on 30.8.2018 Shri Rahul Gandhi had tweeted that ‘Globalised corruption. This #Rafale aircraft really does fly far and fast! It’s also going to drop some big bunker buster bombs in the next couple of weeks.’ The former French President’s first statement rhymes with Rahul Gandhi’s prediction,” he wrote.

For past two days, a political storm has been blowing over Hollande’s statement that the Indian government had proposed Reliance as the Indian partner and he did not have a choice in the matter. He later backtracked, saying  he was “unaware” and “only Dassault can comment on this.”

“He has, in a subsequent statement, said that he is ‘not aware’ if government ever lobbied for Reliance Defence and that ‘the partners chose themselves’,” Jaitley said in his Facebook post. This, he said, “contradicts his first questionable statement which the French government and Dassault have denied”.

Congress leader Anand Sharma wondered why ministers were trying to protect the PM in the matter. “PM Modi knows his lies are caught, that’s why he is silent... He cannot escape. All those who will try to cover up the scam of the century will be exposed,” Sharma said.

Stay up to date on all the latest Nation news with The New Indian Express App. Download now
(Get the news that matters from New Indian Express on WhatsApp. Click this link and hit 'Click to Subscribe'. Follow the instructions after that.)
TAGS
Rahul Gandhi Arun Jaitley Francois Hollande Rafale Jet Rafale deal