The Directorate of School Education Kashmir last week ordered suspension of recognition of two private schools in Srinagar for steep fee hikes and non-compliance with  orders from the department.

The Governor’s administration has become tough against schools over steep fee hikes, and has suspended the recognition of two schools in Srinagar. The Directorate of School Education Kashmir last week ordered suspension of recognition of two private schools in Srinagar—RP School, Mallabagh, and Green Valley Educational Institute, Ellahibagh—for steep fee hikes and non-compliance with  orders from the department. The Jammu and Kashmir Board of School Education and District Institute of Education and Training were told not to entertain any request from the schools until further orders from the directorate. 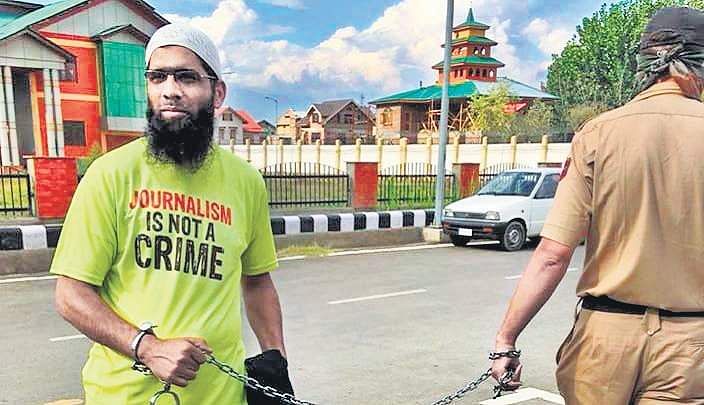 Jammu and Kashmir is going to install air quality monitoring systems in the capital cities of Srinagar and Jammu to monitor air quality. An official said the Continuous Ambient Air Quality Monitoring System will monitor the pollution level in the two cities. The State Pollution Control Board (SPCB) has invited bids and hopefully the system would be in place soon. The air quality in the state has fallen over the years due to a rise in the number of vehicles, crushers, factories and brick kilns. The air quality monitoring system would be connected to the servers of the SPCB headquarters in Srinagar and Jammu, and also to the main servers of the Central Pollution Control Board in New Delhi.

The judicial remand of local journalist Asif Sultan, who was arrested by police last month, has been extended by a local court until October 1. Sultan, an assistant editor at local magazine ‘Kashmir Narrator’, was arrested from his home in Batamaloo area of uptown Srinagar on September 23 and presented in court on September 1. According to police, initial questioning of the accused and subsequent searches and disclosures made in the case have led to seizure of incriminating materials from various locations. “It also establishes his complicity in harbouring known militants involved in serious terror crimes.” Police had seized his laptop, cellphones and documents. Sultan’s family members have denied the police charge that their son was “harbouring militants”.

FBOs directed to get registered

After complaints that most of the Food Business Operators (FBOs) in Kashmir were operating without a licence, the government has directed all unregistered FBOs as well as those intending to start a food business to get their units registered. The Commissioner Food Safety, Dr Abdul Kabir Dar, said that a small vendor or a large-scale manufactures dealing with food items could not operate without a valid Food Safety and Standards Authority of India (FSSAI) registration or licence.

He said that in order to speed up the process of mandatory licensing and registration for running a food business, a team of food safety officers would conduct special drives throughout the state, wherein all stakeholders, especially FBOs, will be informed about the importance of the licence or registration and the steps to be taken for obtaining the same. Those who fail to comply with the government directives have been warned of strict action.

Our correspondent in Jammu and Kashmir

Stay up to date on all the latest Nation news with The New Indian Express App. Download now
TAGS
Srinagar diary Jammu and Kashmir Asif Sultan