Verdicts are expected on the constitutional validity of Aadhaar, reservation in job promotions and whether proceedings of the court can be live-streamed. 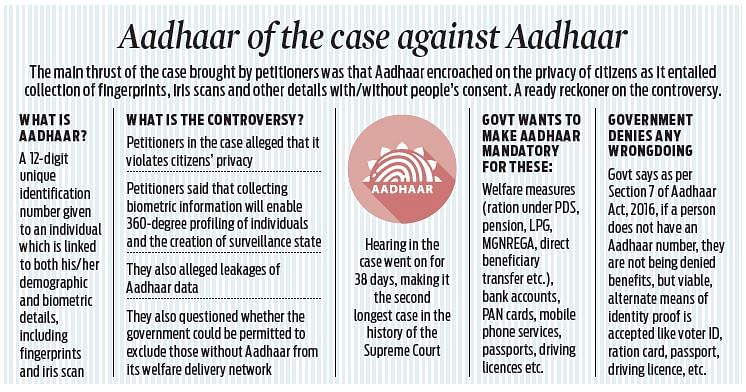 NEW DELHI: The Supreme Court is likely to pronounce today its verdict on three important matters — the constitutional validity of Aadhaar, reservation in job promotions and whether proceedings of the court can be live-streamed.

The most awaited of these is the verdict on Aadhaar. A five-judge Constitution Bench comprising Chief Justice Dipak Misra and Justices A K Sikri, A M Khanwilkar, D Y Chandrachud and Ashok Bhushan had reserved its verdict on May 11 after hearing the arguments for 38 days starting January 17.

The challenges against Aadhaar had begun even before the Aadhaar law came into existence in 2016. So far, the Centre has issued 139 notifications, practically touching every aspect of a citizen’s day-to-day life, making Aadhaar mandatory for various services and benefits.

A key argument against the Aadhaar scheme was that it was violative of the nine-judge Bench verdict that had held that Right to Privacy is a fundamental right under the Constitution.

As many as 31 petitions have been filed in the matter. In the second ruling, the apex court likely to pronounce a verdict on the Centre’s plea seeking reconsideration of its 2006 judgment laying down the criteria for reservation in promotion for SC/ST employees.

According to the plea, the apex court’s judgment is coming in the way of filling lakhs of vacancies in different departments.

In its 2006 judgment, the Supreme Court had ruled that before making provision for reservation in promotion, the state will have to specify backwardness, the inadequacy of representation and overall administrative efficiency.

The third ruling is expected to bring in more transparency in the judicial system if the court allows live streaming of its proceedings, especially in cases of constitutional importance. During the hearing, the court said it was ready to go live on camera, while the government proposed a separate TV channel.