The manifesto offered an income scheme to all farmers and a pucca house to every homeless family by 2022.

NEW DELHI: National security, multiple welfare measures for farmers and a slew of initiatives like pensions to woo small traders - the party’s core vote bank hit by the GST rollout and demonetisation - were at the heart of the 45-page BJP manifesto released three days ahead of the first phase voting for the Lok Sabha polls on Monday. But it was surprisingly silent on job creation.

“Nationalism is our inspiration, empowerment of weaker sections our vision and good governance our mantra,” Prime Minister Narendra Modi emphasised.In sync with its nationalist and Hindutva line, the BJP emphatically iterated the party’s political resolve to look for ways to build the Ram temple expeditiously and abrogate Articles 370 and 35A - providing special status to Jammu and Kashmir.

To National Conference chief Farooq Abdullah’s claim that “abrogating Article 370 will pave the way for freedom for people of J&K,”

Home Minister Rajnath Singh retorted: “There will be no option other than abolish 370 and 35A, if there is a demand for separate prime minister for terrorism affected areas.”

The manifesto offered an income scheme to all farmers and a pucca house to every homeless family by 2022. Its emphasis showed the party’s urgency to address farm distress, realising it was a factor in its loss of power in Rajasthan, Chhattisgarh and Madhya Pradesh last year.

However, the economics of the manifesto, which promises interest-free loans and pensions to small farmers and traders, apart from the promise of a $5 trillion economy by 2025, remained blurred. It did not account for the country’s jobless growth either.

Finance Minister Arun Jaitley said, “the idea is to invest Rs 100 lakh crore in infrastructure over the next five years, besides doubling incomes of farmers and maintaining an 8% plus GDP growth.”

How it intended to achieve it, in the face of a global slowdown and lower domestic demand, remained unclear.

“It’s not clear from where money for Rs 100 lakh crore investment in infra and another Rs 25 lakh crore in agriculture and rural sector would come from. High borrowings could be one way out, but that would stymie private sector investment and prove inflationary,” said Prof Biswajit Dhar of the Jawaharlal Nehru University.

Similarly, a promise to give interest-free loans of up to Rs 1 lakh for 1-5 years to small farmers if they repaid the principal on time, was unclear on whether they would be charged an earlier announced subsidised interest of 4 per cent in case of repayment failure. 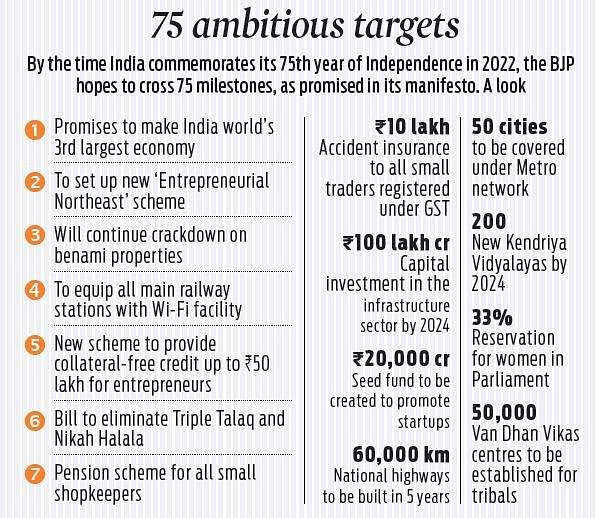