Though a BJP wave is evident in Hathras and Bulandshahr, most point out that a strong Opposition is necessary for a better govt

“BJP hi jeetni chahiye lekin vipaksh bhi mazboot hona chahiye warna loktantra pe asar padega (The BJP must win but we need a strong Opposition or else democracy will fail),” the skinny man with a tilak on his forehead and surgically-repaired mouth, said. Surprisingly, most of the voters in this quaint, politically low-temper constituency feel the same.

Take the case of Jaishankar, a Dalit of Gusoti village, 8 km ahead.

“We have seen what a one-sided government does. There has been development in my area and I have also benefitted. But I am not the only citizen. If the BJP did so much work while not being challenged by an Opposition, imagine the work it would do if there was a stronger Opposition,” the father of a three-year-old daughter said. 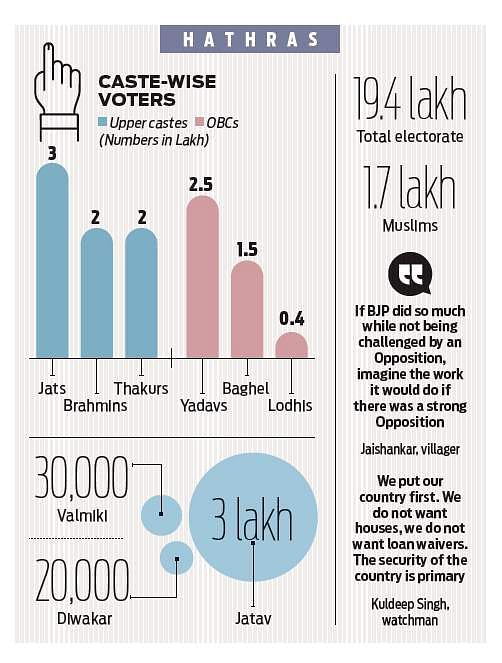 The alternating barren lands and concrete structures change into a bustling marketplace as one enters Hathras city.

Though he complains that GST and demonetization hit him hard, he believes only Modi can take care of the country’s borders.

With his hands pumped into fists he almost shouts, “Jo Congress ne 70 saal mein nahi kiya, Modiji ne 5 saal mein kar dikhaya. (What the Congress could not do in 70 years, Modi did it in five.)”

Beside him bearded and unusually fit 60-year-old Kallu Khan dives into the conversation. Khan is Valmiki’s friend.

“Not them (Congress) sir. Make the alliance a little stronger so Modi feels that his power can be challenged,” he says.

Advocate JN Dixit is running late for an appointment but finds time to say, “Modi will return to power but the alliance will give him a tough fight.”

Hathras has a total electorate of around 19 lakh dominated by 3 lakh Jats and 2.25 lakh Muslims. But all parties in the fray are confident of winning. BJP feels the alliance will consolidate only Muslim, Jatav and Yadav votes, while other castes would back the saffron.

Alliance workers claim the combination of Akhilesh Yadav and Mayawati provides more stability. Even the Congress claims its local candidate-legislator for Iglas has a chance.

However, voters in Iglas, a quaint town-like village, defy the Congress logic. 34-year-old body-builder Ahmed Qureshi, 45-year-old milk merchant Ballu and 27-year-old housewife Rama Singh and a few others debate who should win.

While Qureshi says people need to elect a leader for the whole constituency, Ballu quickly retorts, saying someone in sync with the Central government would be better.

“We need someone who does work, irrespective of party lines. Aur sab jaante hai kaam kaun karta hai. (Everybody knows who does work,)” says Rama in an apparent reference to the BJP.

Their discussion finds a new voice as a man with a thick moustache announces, “We need a strong leader... The mix and match system (alliance) will only result in doom.” All voices are hushed as the panchayat officer walks in to solve the case at hand.

There is an eerie feeling, entering the limits of Bulanshahr. Not long ago, it was here that an inspector and a 21-year-old bystander were killed in violence that erupted following rumours of cow slaughter. The flare-up is definitely not on their minds as polls approach.

Rural areas of the constituency seem content with the government’s work. Even as they admit that the local MP has been missing in action for five years, they credit the improvement in their lives to the Modi dispensation. Saleem Anwar, a teacher at Gangrewa, proudly points to the toilets built in and around the school. “We got freedom 70 years ago but no one built toilets, until now.”

Says Ballu Kumar, 47, daily-wage labourer in Chola village “Sir, we never thought that we could build a pucca house, but I did.” Kumar is one of the beneficiaries of the Pradhan Mantri Awas Yojana - Gramin.

As one enters Bulanshahr city, the huts, hand pumps and the cattle give way to malls, shops and hotels. Even here, the violence does not resonate with the people.

“We put our country first. We do not want houses, loan waivers —security of the country matters,” watchman Kuldeep Singh says.

Ask Usman Malik, 30, whether recent violence would influence his vote and he says, “Gau hatya is a crime... If someone did it, they must be punished.”

The same sentiment echoes in the sugarcane and wheat fields later in Mawah, the village where the carcasses of the cows were discovered. Feeding his horse, Mukhbir (53) says cow slaughter is wrong.

“It is for the police to find out if the cows died a natural death, or were actually slaughtered. All we care about is cylinders, toilets and houses. We have got them all.”

His friend Suresh Saini (45) says, “Modi built houses for us. He gave us shelter. We are happy.”