Lok Sabha elections 2019: Giants step out to get inked in third phase

Voting to be held in crucial constituencies in Uttar Pradesh, Bihar and West Bengal

NEW DELHI:  The country goes into the third phase of polling, involving 116 constituencies, on Tuesday, with some of the biggest political names in north India contesting seats in the cow belt.

All 26 seats in Gujarat will see voting, including Gandhinagar, where BJP president Amit Shah, having replaced veteran LK Advani, is contesting for the first time. A total of 4,51,52,373 voters are eligible to cast their vote across all the 26 Lok Sabha constituencies, where 371 candidates are in the fray. The BJP had won all the 26 seats in the state in the 2014 general elections.

The lone seat of Anantnag in Jammu and Kashmir will see the first phase of three-phased polling, with PDP chief and erstwhile BJP ally Mehbooba Mufti locked in a contest with state Congress president GA Mir, while 10 seats are up for grabs in the heartland of NCP across Marathwada and coastal Maharashtra, where Sujay Vikhe Patil in Ahmednagar and Sharad Pawar’s daughter, the MP from Baramati, are facing tough fights. 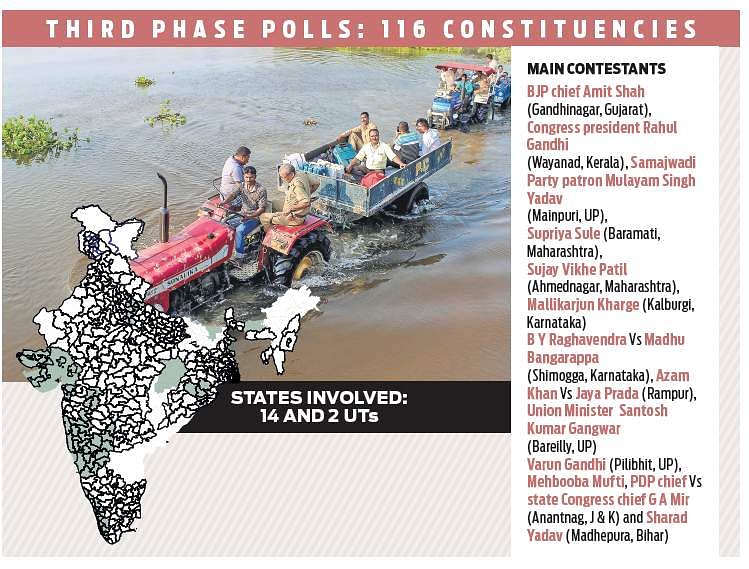 The Bengal fight on five seats would involve some 56,76,325 electors, with 394 companies of security forces to conduct the polls. While the NDA is banking on a consolidation of Hindu votes and a split in the minority share, the Trinamool is hoping to maximise its sway.

The big fight is in Congress legacy-laden Malda (North) seat as the sitting MP defected to Trinamool and is contesting from the same constituency against her cousin, fielded by the Congress.

In Chattisgarh, with the BJP replacing all 10 sitting MPs with fresh faces after its huge loss in the Assembly poll, it is facing some rebellion, but the Congress too has fielded fresh faces, making the battle evener. With a no-wave election scene this time, the BJP, after a wipe-out in the Assembly polls in 2018, is heavily banking on Modi’s magic on the 7 seats involved.

A pro-change mood in favour of Congress and a subtle undercurrent against the BJP, largely owing to the fatigue that came from its 15 years in power, led to the BJP’s loss in the Assembly polls.

In Bihar, the main fight is at Madhepura in the Yadav heartland, where former NDA convenor Sharad Yadav is an RJD candidate. In Supaul, Ranjeet Ranjan of Congress faces an uphill battle, with the polls at Jhanjharpur, Araria and Jhanjharpur being crucial in the ultimate analysis. There are 82 candidates and 89,09,263 voters, including 42,44,284 women.

The 10 UP seats involving 1.76 crore electors are involved in the most crucial phase, with seats like Moradabad, Rampur, Sambhal, Eta, Aonla, Bareilly and Pilibhit, Badaun, Manipuri and Firozabad up for grabs. Nationalism post-airstrikes, the Modi factor, impact of  Central welfare schemes like the PM housing scheme, Ujjwala, rural electrification, Ayushman Bharat and PM-KISAN, and toilets are most prominent here, with the opposition Gathbandhan expected to score better arithmetically. Some 207 companies of paramilitary forces, 75 companies of Provincial Armed Constabulary, and the state police force will be on guard, with Varun Gandhi at Pilibhit, Azam Khan and Jaya Prada at Rampur and Shivpal Yadav at Firozabad being involved in the big contests.

Five constituencies—Gauhati, Barpeta, Dhubri, Kokrajhar (all in Assam) and Tripura East in Tripura—will go to the last phase, but all eyes are on the Gauhati seat, where two ‘queens’ are up against each other. The Congress’s Bobbeeta Sharma had won the first “Miss Northeast” beauty pageant held in 1988. The BJP candidate is Queen Ojha, which is her name. While the Congress is hoping to cash in on Citizenship (Amendment) Bill, 2016, the BJP has played the development card.(inputs from Prasanta Mazumdar, Ejaz Kaiser, Rajesh K Thakur, Pranab Mandal, Fayaz Wani, Abhijit Mulye, Namita Bajpai)