A minor boy prevented his mother from jumping on the Metro tracks on Friday.

NEW DELHI:  A minor boy prevented his mother from jumping on the Metro tracks on Friday.
The incident took place on Thursday after the woman arrived with her two children — a 12-year-old girl and a 10-year-old boy — at the Inderlok Metro station on the Redline, Central Industrial Security Force (CISF), which deploys its personnel at Metro stations, said on Friday.

She had come with the intention of jumping in front of a speeding train, the CISF added. Quizzed on the incident, a CISF official said that the woman arrived at platform number 3 of the Inderlok station with her wards around 10.50 am. She had planned to jump off with her children, the official said. 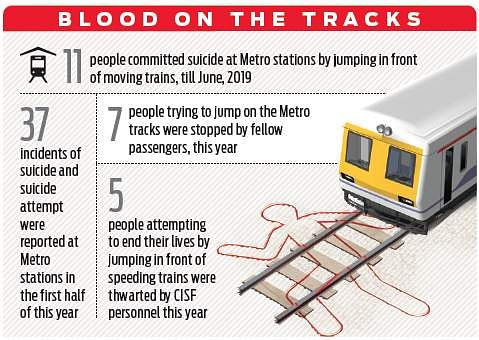 “However, sensing that his mother was about to jump, the boy managed to wrench himself free from her grasp and rushed to alert the security staff on duty,” the CISF official said, adding that the security personnel caught her before she could jump. The trip was then brought to the Station Controller Room.

On being enquired why she tried to end her life on the tracks, she revealed that with her husband away in Australia, her landlord sexually assaulted her. She said she lodged a written complaint with Moti Nagar police, but no action was taken.

“Delhi Metro Rail Police were called to the scene. On arrival of the Metro police personnel, she and her children were taken to the Netaji Subhas Place station for further interrogation,” the CISF official said.
According to Delhi Police, the woman appeared to be “mentally unstable”.

The woman was admitted to the Institute of Human Behaviour and Allied Sciences (IBHAS), police said.
Deputy Commissioner of Police, West, Monika Bhardwaj said according to doctors, she needed medical help as she did not appear to be mentally sound.

Stay up to date on all the latest Nation news with The New Indian Express App. Download now
(Get the news that matters from New Indian Express on WhatsApp. Click this link and hit 'Click to Subscribe'. Follow the instructions after that.)
TAGS
Delhi metro Suicide bid Metro suicide