Mufti described the Modi government's decision to scrap Article 370 of the Constitution as "the darkest day in Indian democracy".

Mufti and Abdullah are among those placed under house arrest since midnight Monday.

Sources said Mufti was arrested on the orders of the Executive Magistrate in Srinagar and shifted to Hari Niwas guest house.

In his order, the First Class Executive Magistrate cited apprehensions of law and order situation and breach of peace and tranquillity in Kashmir.

"Your (Mufti) activities are likely to cause breach of peace keeping into consideration your recent activities that may likely lead to serious law and order situation and breach of peace and tranquillity in Kashmir," the order said.

It said Mehbooba and her party activists were about to proceed in a procession in public which could threaten law and order. "Keeping into consideration the present situation in Kashmir...I do hereby immediately order your detention," said the Executive Magistrate.

Mehbooba Mufti had described the Modi government's decision to scrap Article 370 of the Constitution as "the darkest day in Indian democracy".

The overwhelming mandate that Modi ji got had given us hope that like a statesman he too would tread the path taken by Vajpayee ji & reach out to people of J&K. What an utter betrayal of trust.

"Decision of J&K leadership to reject 2 nation theory in 1947 & align with India has backfired. Unilateral decision of GOI to scrap Article 370 is illegal & unconstitutional which will make India an occupational force in J&K," the former Chief Minister tweeted.

"It will have catastrophic consequences for the subcontinent. GOI's intentions are clear. They want the territory of J&K by terrorising its people. India has failed Kashmir in keeping its promises," she said.

With mobile Internet and SMS connectivity, landline services and TV channels suspended, panicked people were unable to reach out to their friends and family members with the Valley being cut off from the rest of India.

Authorities imposed an overnight curfew in Kishtwar, Rajouri districts and Banihal area of Ramban district, Deputy Commissioner of Kishtwar Angrez Singh Rana said. Restrictions continue to be imposed in many districts of Jammu division and Srinagar.

The Army, meanwhile, moved six columns to Jammu to maintain law and order. 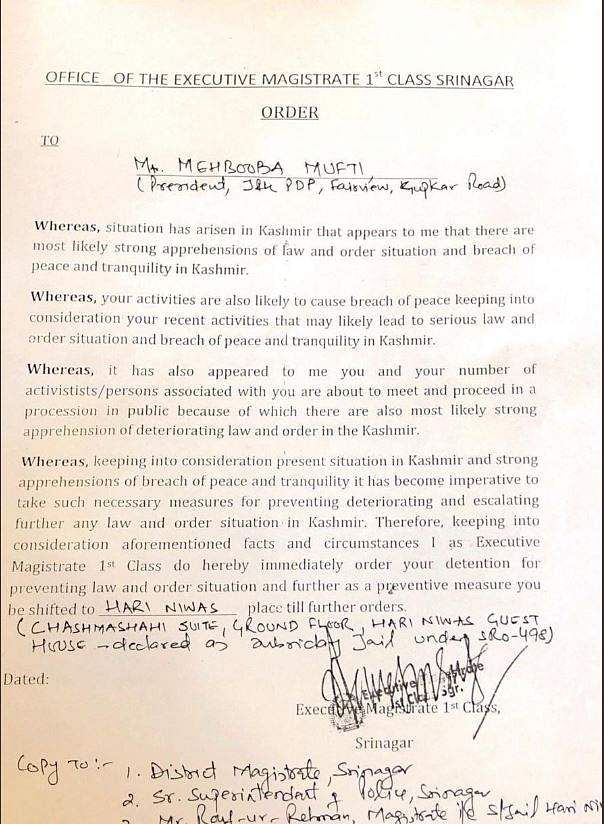 The government had imposed restrictions under Section 144 of the CrPC in Srinagar district midnight Monday as a precautionary measure and banned public movement, while all educational institutions, including universities in Srinagar and Jammu, were closed.

Officials said all public meetings have been banned and only identity cards of essential services officials were treated as movement passes and police and civil administration officials were provided with satellite phones to communicate orders.

READ HERE | What was Article 370 of the Constitution? Why was it revoked?

Meanwhile, barricades were erected on many arterial roads, including the entry and exit points to Srinagar, and riot control vehicles were put on standby in sensitive areas.

While tourists and students have been leaving the Valley in droves since the last two days, tour operators said they received cancellations from foreign and domestic tourists after Article 370 was revoked.

“We have seen around 30% increase in booking cancellations by travellers heading to Srinagar, Gulmarg, Pahalgam and other parts of Kashmir Valley in the past three days,” said Aloke Bajpai, CEO & co-founder, Ixigo.

(With inputs from online desk and IANS)

Stay up to date on all the latest Nation news with The New Indian Express App. Download now
(Get the news that matters from New Indian Express on WhatsApp. Click this link and hit 'Click to Subscribe'. Follow the instructions after that.)
TAGS
Mehbooba Mufti Jammu and Kashmir Article 370 Article 35 A kashmir security crisis Omar Abdullah Farooq Abdullah