Some places in Lahaul-Spiti and Chamba districts also received the first snowfall of the season. Chamba-Pangi road as blocked due to snow.

CHANDIGARH: Heavy rains in Himachal Pradesh has led to an estimated Rs 20 crore loss of public and private property in the last two days and an overall loss of Rs 574 crore in last one and half month.

Several roads in the state are shut due to landslides triggered by rain. More than 300 vehicles, carrying tourists and locals, are stuck since Sunday between Keylong and the Rohtang Pass because of landslides.

Some places in Lahaul-Spiti and Chamba districts also received the first snowfall of the season. Chamba-Pangi road as blocked due to snow.

“Snowfall does not take place in these areas in August,” said a MeT official.

In neighbouring Punjab, around 100 villages were affected due to floods. Punjab CM Amarinder Singh announced Rs 100 crore for emergency relief and rehabilitation measures in the flood-hit regions of the state.

The state government declared the current flood situation as a natural calamity.

The Army, IAF and NDRF carried out rescue operations in flood-hit parts of Punjab and Haryana on Monday. 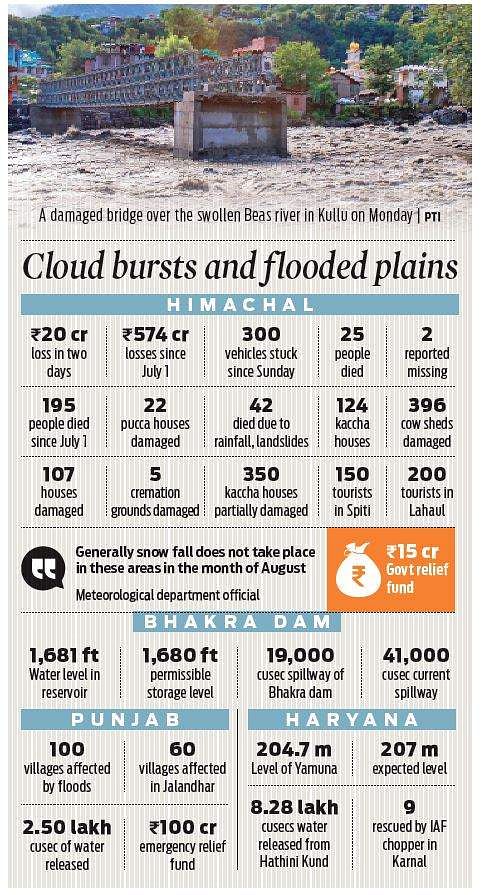 Stay up to date on all the latest Nation news with The New Indian Express App. Download now
(Get the news that matters from New Indian Express on WhatsApp. Click this link and hit 'Click to Subscribe'. Follow the instructions after that.)
TAGS
Himachal Rains Himachal Floods Flood Fury