According to various estimates, 10-20 lakh people are likely to be excluded from the National Register of Citizens when the final list is published on Saturday.

GUWAHATI: At least 12 declared “foreigners” in Assam tasted freedom after over three years but the sword of detention now hangs over hundreds and thousands of others.

According to various estimates, 10-20 lakh people are likely to be excluded from the National Register of Citizens (NRC) when the final list is published on Saturday. The saving grace is that detention of the excluded is not going to be immediate.

Even the declared foreigners, granted conditional release by the authorities over the past two weeks, are not at ease as their families have remained either “divided” or excluded.

“Rosogollas”, an integral part of Bengali families and more so, during a festive occasion, were not distributed among neighbours when they came to see declared foreigner Sudhan Sarkar (65) at his house following his release on August 19. Blame it on the NRC.

Sarkar’s younger son Dilip, who is a daily wager, and three grandsons, aged 18, 15 and 13 years, from his elder son Sanjay have been left out of the NRC. His wife and Sanjay are no more. Sanjay’s wife Tara is the only member in the family to be included in NRC. 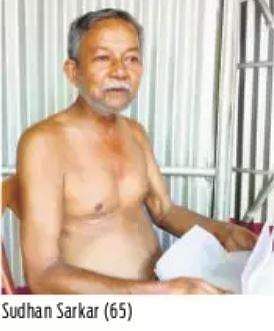 The quirky Sarkar was declared a “foreigner” ex-parte as he ignored the notices of Foreigners’ Tribunal that sought his appearance to prove he is an Indian and later, arrested from the local market in 2016.

“He had received the notices but he ignored them. His argument was he is an Indian and it would be humiliating for him to depose before the tribunal to prove his citizenship,” Tara said.

Sarkar claimed his father and uncle had migrated to Dalu in Garo Hills of Meghalaya during the British time when there was no Bangladesh. He said his family was known to the family of former Lok Sabha Speaker PA Sangma and that he migrated to Assam for business purpose.

ALSO READ: It may take years to dispose of cases of NRC-rejected

“He is not in his previous self, mentally. Sometimes, he wants to talk about NRC but given his deteriorating health, I forbid him to do so,” Tara, who earns meagerly by sewing clothes, said.

She claimed they have various pre-1971 documents, including that of land, to prove they are Indians.

“Let’s see if the names of my father-in-law, brother-in-law and three children get included in the final NRC list,” she signed off.

Bachchu Sheikh (39), a daily wager from Karbala village of Goalpara, is equally worried. In his nine-member family, he, his two brothers and three children have remained excluded. His mother Baserun, who died when he was in detention, his wife Khodeja and the eldest daughter have been included in NRC.

“Our last hope is the final list. I don’t want my children to suffer like me,” Sheikh said.

He was arrested in January 2014 and granted bail after a few months. When he thought he would be able to wipe out the “Bangladesh” tag, he was declared a foreigner in 2015, re-arrested and put in the detention camp until being released on August 19 this year. 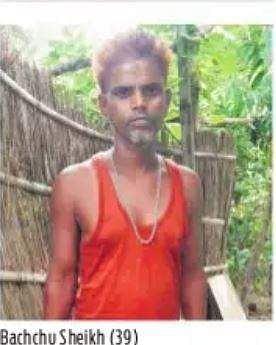 “I had submitted land document to prove that my parents have been living in Assam from before the NRC cut-off date of March 24, 1971. They did not accept it,” Sheikh said.

Reminiscing the days in detention, he said the declared foreigners were treated on a par with criminals in the detention camp, which is a separate cell in the district jail of Goalpara.

“Fifty of us were made to live in a room that could house at the most 40 people. Probably, dogs will not eat the food that we ate. It was the thieves’ food. At 5 am sharp, we were served a roti and a cup of tea. Lunch was served at 10 am while 5 pm was the time for dinner,” he said, adding, “There were just one toilet and two urinals. We used to stand in a queue to use the toilet. The water supply was erratic.”

There is no joy also in the family of Rabi Dey (56) who is among the dozen declared foreigners who were released. None in his 14-member joint family from Krishnai Jagruto Para was included in the NRC.

“What celebration? Given how people are being treated in the name of Bangladeshi, can you be at peace when none of your family members is in the NRC?” Dey’s elder brother Motilal, a businessman, asked this correspondent.

He said he along with his two brothers and the family of his uncle had migrated to India from Bangladesh in 1964.

“My brother was issued the notice by the Foreigners’ Tribunal in 2016. I accompanied him when he went to depose before the tribunal. I told the judge about how we all migrated. My brother, however, said he had come with our uncle. This raised suspicion in the judge’s mind. Later, he was declared a foreigner and sent to the detention camp,” Motilal said.

He said he was worried about NRC despite possessing land document and other documents of 1960s.

Stay up to date on all the latest Nation news with The New Indian Express App. Download now
(Get the news that matters from New Indian Express on WhatsApp. Click this link and hit 'Click to Subscribe'. Follow the instructions after that.)
TAGS
Assam NRC Final NRC list Foreigners in Assam NRC

If India has de-radicalisation camps, Centre should make clear where they are: MY Tarigami