Police stations from Gujarat, Madhya Pradesh, Tamil Nadu and Arunachal Pradesh also made it to the list of best police stations in the country for effective policing.

These rankings are based on a wide range of parameters such as addressing the number of offences related to property disputes, crimes against women and crimes against weaker sections at a police station, according to the Union Home ministry. For the rankings, weightage was also given to infrastructure of police stations and the approachability of personnel and citizen feedback. 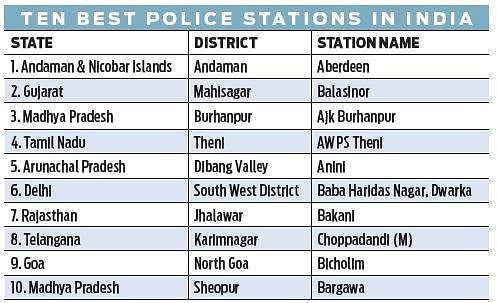 In a statement, the ministry said, “This effort reflects the directions of the PM while addressing the DGPs during the 2015 conference in Kutch, Gujarat. He had directed that parameters should be laid down for grading police stations and assessing their performance based on feedback.”

More from Nation.
Now we are on Telegram too. Follow us for updates
TAGS
police stations Aberdeen police station Andaman and Nicobar Andaman police