The minister said advisories have been issued to all states and union territories to furnish complete data sets promptly for the speedy publication of ADSI report.

“As informed by NCRB, many states/union territories reported nil data on suicides by farmers/cultivators and agricultural labourers,” the home minister said.

Reddy was replying to questions by the Wayanad MP who asked whether the National Crime Records Bureau (NCRB) had received the data on farmer suicides from states and union territories since 2016 and if not, the reasons. Rahul also sought to know the reasons for not publishing reports of accidental deaths and suicides in the country by the NCRB since 2015 and whether the bureau proposes to re-start its publication.

In a written reply, the minister said the data on accidental deaths and suicides, including farmer suicides, are reported by states and union territories to the NCRB which publishes it as “Accidental Deaths and Suicides in India” (ADSI) Report.

The minister said advisories have been issued to all states and union territories to furnish complete data sets promptly for the speedy publication of ADSI report.

According to the latest report, as many as 14 states/UTs including Bihar, Odisha and West Bengal have reported zero suicides to NCRB. 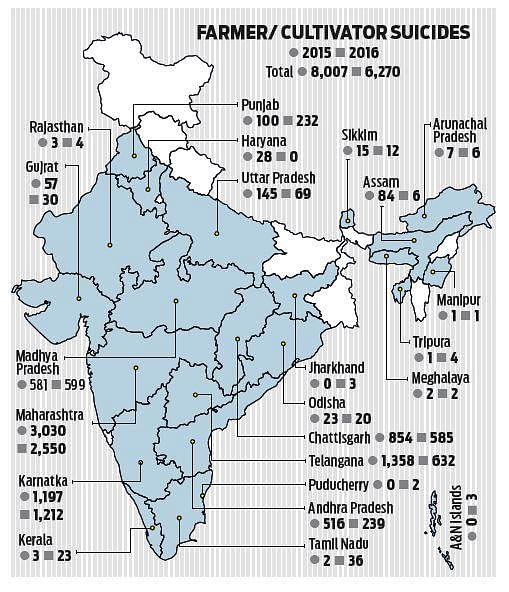 More from Nation.
Now we are on Telegram too. Follow us for updates
TAGS
Farmer suicides