National Highways were blocked at several places and railway tracks were set on fire at Uluberia in Howrah and Beldanga in Murshidabad districts using tyres and furniture.

KOLKATA: An hour after Trinamool supremo and Chief Minister Mamata Banerjee said she would not allow the amended Citizenship Act in Bengal under any circumstances and announced a mass movements against it, violent protests hit a number of places across the state. Several Muslim organisations, known for extending support to the ruling party, took to the streets and railway tracks on Friday.

National Highways were blocked at several places and railway tracks were set on fire at Uluberia in Howrah and Beldanga in Murshidabad districts using tyres and furniture. Train services were affected because of the blockades on the tracks.

Traffic movement was thrown out of gear at the Park Circus seven-point crossing, a Muslim dominated area, as tyres were set ablaze on the middle of the bustling intersection. The city was cut off from its eastern part as the arterial thoroughfares pass through the intersection.

Jamiat Ulema-e-Hind leader Siddiqullah Chowdhury addressed a rally at Shahid Minar in central Kolkata on Friday and said his organisation would not allow any political party to divide the people in Bengal on the line of religion. "We will carry out a mass movement and will not allow the amended act in Bengal," said Chowdhury.

Mamata, on the concluding day of the two-day Business Conclave held in Digha, East Midnapore, hit out at the BJP-led central government.

"Though the amended Citizenship Act has been passed in Parliament, the BJP can’t just bulldoze the states to implement it. We will never allow NRC exercise and Citizenship Act in Bengal under any circumstances," she said. 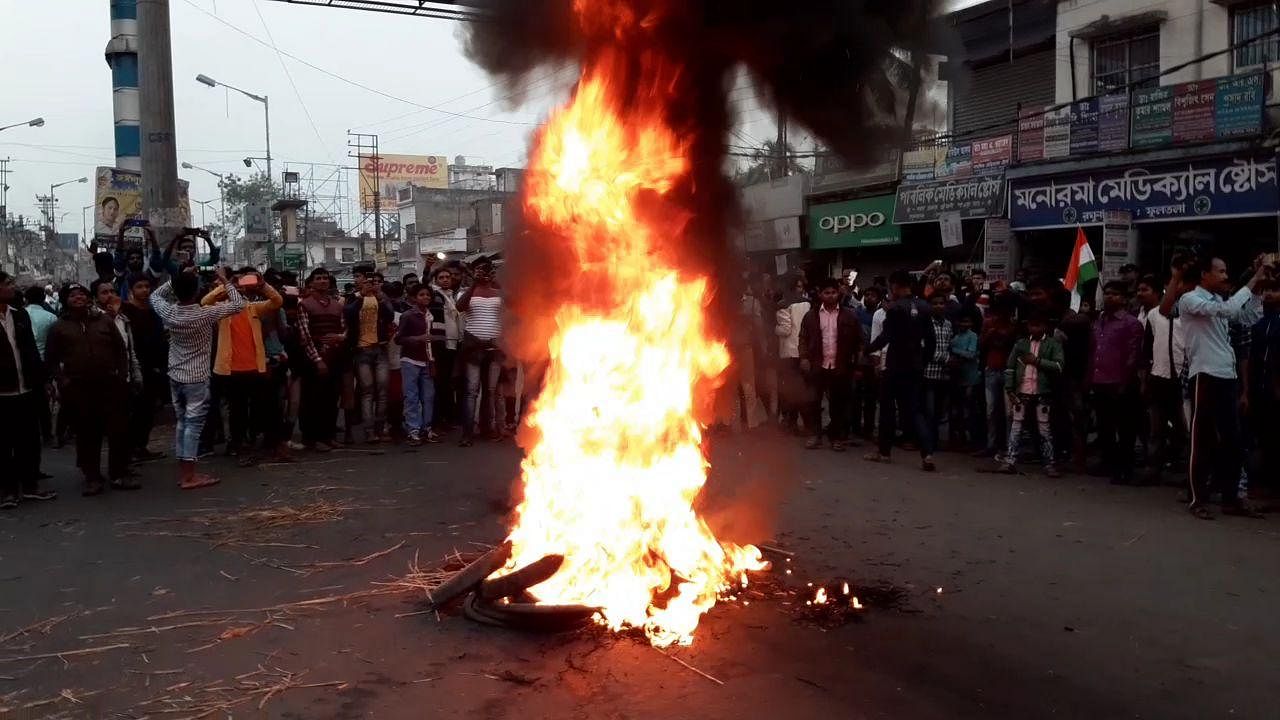 Shortly after Mamata’s announcement in Digha, the protesters with national flags assembled on NH-6 around 2.30 pm and blocked the highway, one of the arterial thoroughfares that connects Kolkata to rest of the country. No policemen were seen at the spot as the protesters set tyres on fire and brought traffic to a standstill.

"The amended Citizenship Act and the NRC are part of a plan of the central government to divide the people on the basis of religion. We are for a secular West Bengal. We do not want to be divided," said Maulana Mustafa of the local Boro Masjid who led the agitation.

Later in the evening, the Chief Minister asked the people of Bengal to organise mass movements in a democratic way.

Bengal governor Jagdeep Dhankar urged the people not to violate any laws.

Now we are on Telegram too. Follow us for updates
TAGS
Mamata Banerjee Citizenship Act Bengal Bengal Protests