While Finance Minister Jayant Patil said that he will be proposing various measures on behalf of several stakeholders, he did not specify the natural calamities that the state faced.

MUMBAI: The Maharashtra government has asked the Centre to extend help to the tune of Rs 14,000 crore for all damages caused by natural calamities in the state, Finance Minister Jayant Patil said on Wednesday. 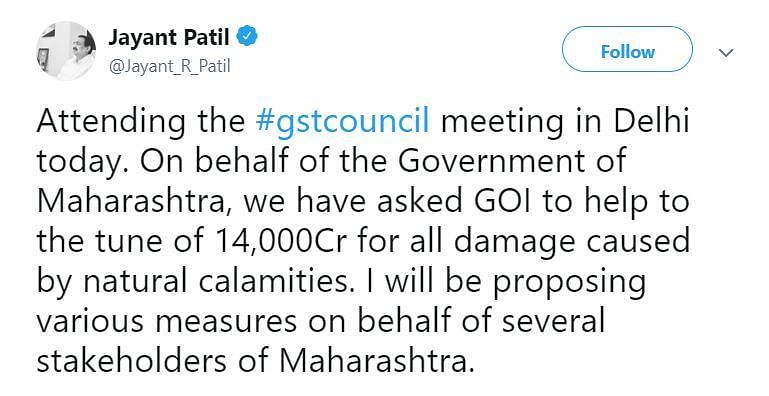 Patil attended the GST Council meeting held in Delhi on Wednesday."Attending the #gstcouncil meeting in Delhi today. On behalf of the Government of Maharashtra, we have asked GOI to help to the tune of 14,000 cr for all damage caused by natural calamities. I will be proposing various measures on behalf of several stakeholders of Maharashtra," he tweeted. However, the minister did not specify the natural calamities that the state faced.

Three Western Maharashtra districts of Satara, Sangli and Kolhapur witnessed devastating floods in July-August this year in which at least 29 people were killed and nearly 2.85 lakh were shifted to safer places. In October-November, untimely rains in parts of the state caused damages to standing crops.