Citizenship Act stir: UP on boil as nine dead with gunshot injuries

The new areas hit by the violence included Bhadohi, Bahraich, Farrukhabad, police said, besides Gorakhpur and Sambhal, which had witnessed violent protests on Thursday too.

LUCKNOW/NEW DELHI: At least nine persons were reported killed with gunshot injuries as fresh waves of protest against the Citizenship (Amendment) Act (CAA) swept across two-dozen cities in Uttar Pradesh on Friday. Clashes also happened in New Delhi and curfew was imposed in trouble-torn Jabalpur.

While UP’s Director General of Police OP Singh confirmed five deaths, he denied the police had opened fire anywhere in the state despite grave provocation.

Unofficial reports, however, put the toll at nine, three of whom died in Meerut, two in Bijnore and one each in Kanpur, Ferozabad, Muzaffarnagar and Sambhal.

According to the figures validated by the DGP, there was one casualty each in Meerut, Bijnore, Ferozabad, Muzaffarnagar and Sambhal.

Three policemen had bullet injuries, while over 50 were hurt in stone-pelting and vandalism in the disturbed towns, DGP Singh informed.

Police and paramilitary forces conducted flag marches and used tear gas and cane charges to disperse crowds who had gathered despite prohibitory orders. Protestors set afire at least 10 vehicles in Ferozabad, while in Bhadohi they clashed violently with the police.

Lucknow was enveloped in a thick blanket of security for Friday prayers. While its shopping districts were deserted, the city remained peaceful. Aligarh, too, reported no disturbances. 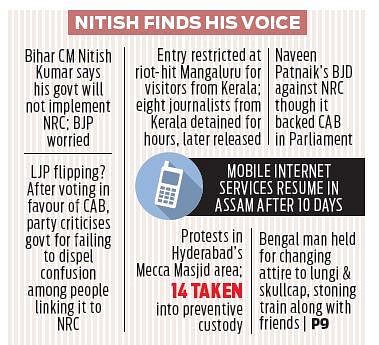 The UP flare-up came even as the Chandrashekhar-led Bhim Army clashed with the police in Delhi Gate-Daryaganj and Seelampur areas of New Delhi, which left six protesters and over a dozen policemen injured. Seventeen Metro stations were again closed as a pre-emptive measure.

In Madhya Pradesh, Jabalpur reported sporadic clashes leading to imposition of curfew in large parts of the town. The state administration slapped Section 144 of the CrPC in all 52 districts and shut down internet and mobile services.

More from Nation.
Now we are on Telegram too. Follow us for updates
TAGS
Citizenship act CAA UP violence CAA protest UP Police