We the people: India stands up against Citizenship Amendment Act

From students, intellectuals, activists and political leaders to common citizens, all have added their voices to the chorus against the CAA

NEW DELHI:  The citizens’ voice against the government’s move to bring in the Citizenship Amendment Act and the police action against protesters is getting stronger by each day.

While people across India came out on the streets to protest against the law on Thursday, more than 10,000 students, academicians, members of civil society, authors and teachers from not just India but across the globe have signed a statement that condemns “in the strongest possible terms the police brutality in Jamia Millia Islamia University, New Delhi, and the ongoing illegal siege and curfew imposed on Aligarh Muslim University, Aligarh”.

The statement, signed by eminent scholars including Noam Chomsky, Judith Butler, Romila Thapar and Nivedita Menon among others, says the Citizenship Amendment Act “contravenes the right to equality and secular citizenship enshrined in the Indian Constitution”. 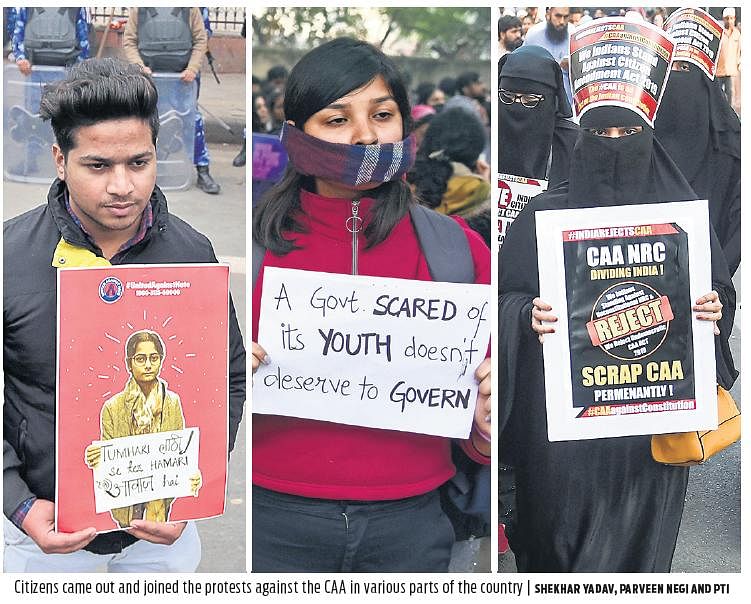 Stressing that peaceful gatherings and protests cannot be treated as criminal misconduct, the statement says that police action in the two varsities is “blatantly illegal”.

Expressing solidarity with the students, the statement said its signatories are concerned about the preservation of universities as ‘non-militarised spaces’ for freedom of thought and expression.

The government, through a series of tweets put out by the Press Information Bureau, has sought to issues clarifications regarding the CAA in a bid to douse the fire over the newly enacted law:

Does the CAA affect any Indian citizen?

No. It has absolutely nothing to do with any Indian citizen in any way. The Indian citizens enjoy fundamental rights conferred on them by the Constitution of India. No statute can abridge or take them away.

Who does the CAA apply to?

It is relevant only for Hindu, Sikh, Jain, Buddhist, Parsi and Christian foreigners, who have migrated from Pakistan, Bangladesh and Afghanistan into India up to 31.12.2014 on account of persecution faced by them due to their religion.

How does it benefit Hindu, Sikh, Jain, Buddhist, Parsi and Christian foreigners hailing from these three countries?

If their travel documents like passport and visa are not in order or are not available, they can apply for Indian citizenship if they were persecuted back home.

Does this mean that Muslims from Pakistan, Bangladesh and Afghanistan can never get Indian citizenship?

No, the present legal process of acquiring Indian citizenship by any foreigner of any category through naturalisation (Section 6 of the Citizenship Act) or through registration (Section 5 of the Act) stays operational. The CAA does not amend or alter it in any manner whatsoever.

Will illegal Muslim immigrants from these three countries be deported under the CAA?

No, the CAA has absolutely nothing to do with the deportation of any foreigner from India.

Can Hindus facing persecution on grounds of religion in countries other than these three countries apply under the CAA?

No, they will have to apply through the usual process to get Indian citizenship just like any other foreigner for either registration or naturalisation as a citizen of India.

Does the CAA also cover other forms of persecution on grounds of race, gender, membership of a political or social group, language, ethnicity etc.?

No, the CAA is a focused law that deals specifically with foreigners of six minority community groups hailing from three neighboring countries that have their distinct state religion.

The CAA will gradually exclude Indian Muslims from the citizenships of India?

The CAA does not apply to any Indian at all. All Indian citizens enjoy the fundamental rights under the Constitution of India.

The CAA has nothing to do with NRC. The legal provisions regarding NRC have been part of the Citizenship Act 1955 since December 2004.

What are the rules for citizenship under CAA?

Appropriate rules under CAA are being framed. They will operationalise various provisions of the CAA.