NEW DELHI: Why did the Raghubar Das-led BJP government fail to win a fresh mandate in Jharkhand? Some of the answers may lie in the socio-economic indices of the state. Be it on access to clean fuel, water, pucca houses, sanitation, toilets or waste management, the state remains at the bottom of the national pile.

While comparable data on past governments in the state was not immediately available, the lack of enough penetration of the Modi government’s flagship schemes like Ujjawala and Swachh Bharat is clearly visible.

For example, only 32% of Jharkhand’s population has access to LPG, as per the latest National Sample Survey (NSS) data compiled by the Ministry of Statistics. Remember, the Ujjawala scheme provided LPG connections to over 8 crore poor people across the country. It had good recall value among voters during the Lok Sabha elections, helping the BJP beat anti-incumbancy at the Centre. Clearly, Jharkhand failed to keep pace with the rest of India.

Add to that the fact that nearly 84% houses have no arrangement for garbage collection and the situation is pretty dismal. As just 16.6% of households have access to a proper drainage system for waste water, a large number of people release it in the open or in low lying areas.

As for housing, the data shows that only 63% families live in pucca houses; the rest make do with semi-pucca or other types of structures. 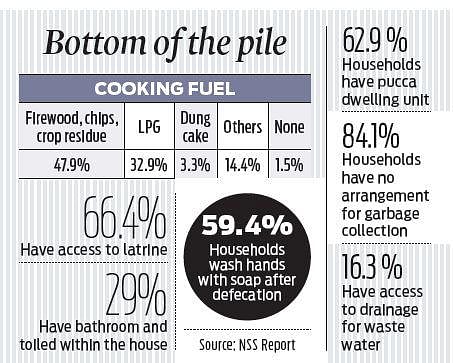 More from Nation.
Now we are on Telegram too. Follow us for updates
TAGS
Raghubar Das BJP governmen Jharkhand