Malviya had conducted a poll on his Twitter handle on Friday, asking whether 'Rajdeep Sardesai should handle PR for ISIS.'

NEW DELHI: The Editors Guild of India slammed BJP's IT cell head Amit Malviya on Saturday for running an "offensive" online poll on journalist Rajdeep Sardesai, calling for its withdrawal and urging the ruling party to strongly caution its functionary over the matter.

Malviya conducted a poll on his Twitter handle on Friday, asking whether "Rajdeep Sardesai should handle PR for ISIS." He gave four options for Twitter users to vote -- agree, strongly agree, disagree and he is irrelevant. 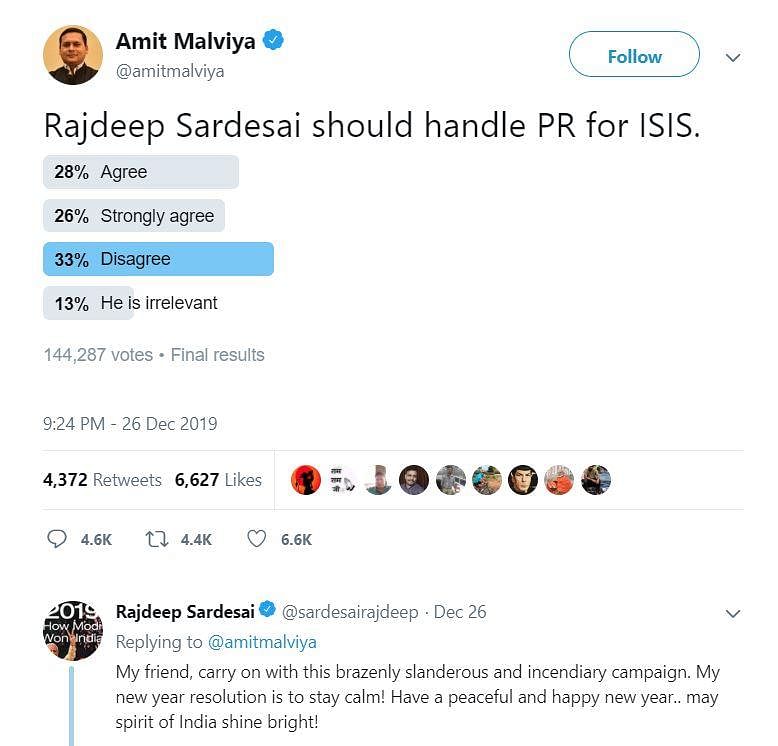 In a statement, the Editors Guild said it had noted with deep dismay the "deplorable act" of Malviya, the head of the ruling Bharatiya Janata Party's (BJP) information technology cell, in which he conducted an offensive, McCarthyist social media "poll" on Sardesai. "The poll on Twitter was not only tasteless, it also questioned the integrity and patriotism of Mr Sardesai, who is a journalist of standing and a former President of the Editors Guild of India," it said.

The Editors Guild of India has issued a statement pic.twitter.com/dFrGYuTYJq

It added that the Twitter poll by the national head of BJP's IT cell also raised questions on the party's commitment to healthy debates and dissent without allowing disagreement to degenerate into abuse. The guild urged Malviya to immediately withdraw the so-called Twitter poll and the BJP to caution him strongly.

Now we are on Telegram too. Follow us for updates
TAGS
Editors Guild of India Amit Malviya Rajdeep Sardesai CAA protests BJP IT cell ISSI PR