For the love of Modi, couple got married only to break up in a month

Two people fell in love with each other and it was the comment in support of PM Narendra Modi that brought them together.

It is normal to find your soulmate on Facebook. But, we warn you, this is not your usual love story.

In what could possibly be made into a romantic movie (more like a rom-com though), two people fell in love with each other. It was a comment in support of PM Narendra Modi that brought them together. To all the singles wondering how, here's what the guy posted on Twitter. 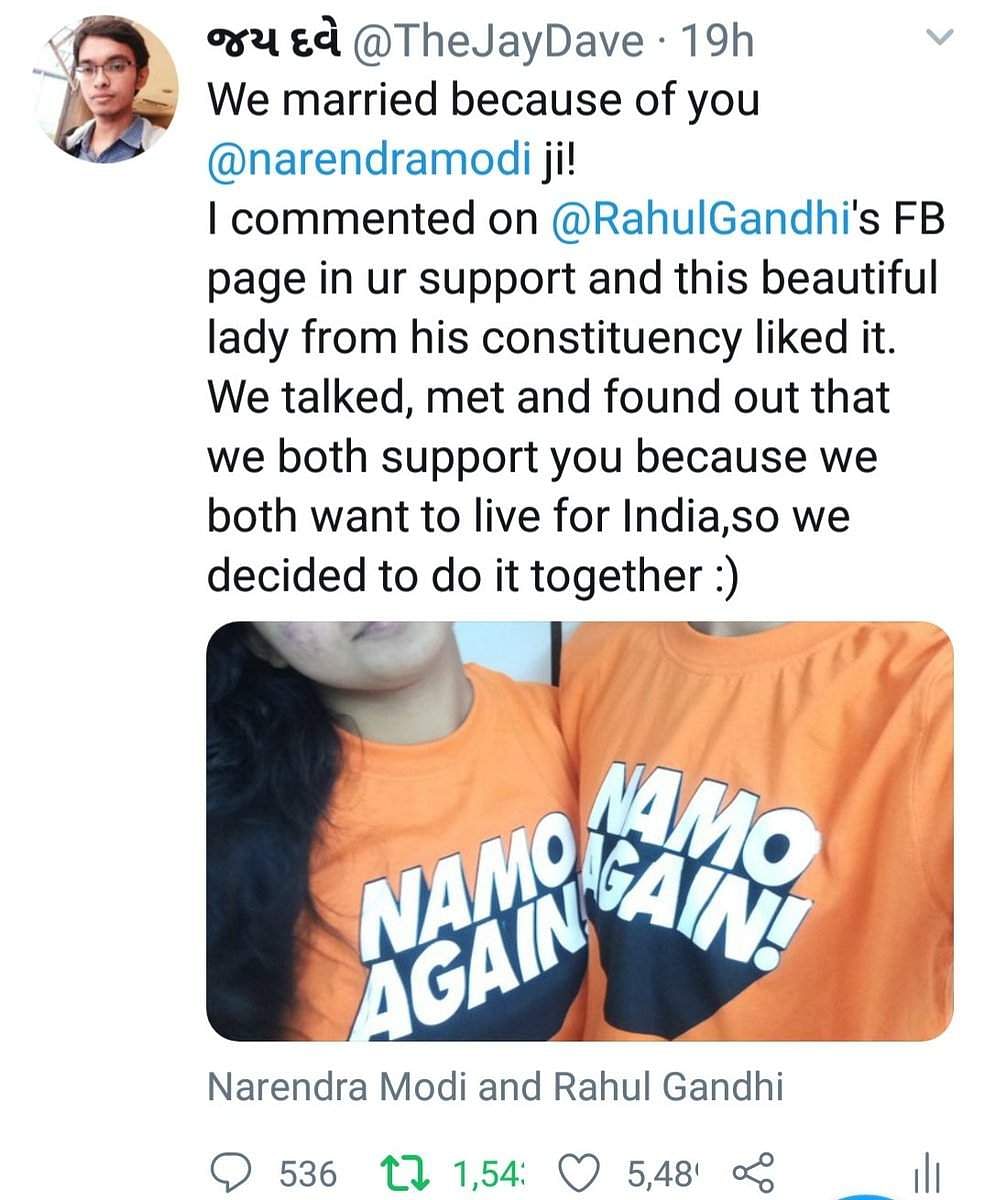 A staunch Modi supporter Jay Dave from Gujarat's Jamnagar recently got married to Alpika Pandey from Bengaluru. Interestingly, it was Jay's comment on Congress chief Rahul Gandhi's Facebook post that sowed the seeds of love.

As Alpika is also a Modi supporter, she liked his comment and they began dating after that.  Six months later they got married.

Thanking Modi, Jay (29) had then written on Twitter that he and Alpika (18) both support Modi as they want to 'live for India.' The couple could be seen in the post-wedding picture sporting a 'NaMo again' t-shirt.

The tweet went viral and later it was removed from his profile. Claiming that he didn't delete the tweet intentionally, Jay posted a screenshot of his previous tweets and cleared the air saying he accidentally deleted his tweet and it has got nothing to do with trolls.

There are misconcpetions in media and social media that accidental deletion of the viral tweet was due to the amount of trolling received.

Fact is just like Modiji, I m used to criticism and trolling, my commitment towards the nation is unaffected by what trolls.
Jay Hind! https://t.co/7PcngTQF1v

Rubbishing Jay's tweet, Alpika took to Twitter to narrate her ordeal. In a series of tweets, Alpika claimed that he used her picture without her consent for his publicity.

She even accused him of abusing her physically and mentally, saying that she even attempted suicide.

"My loyalty for him was doubted to the extent that he clarified many times what was I doing even when I was in the bathroom," she wrote in a tweet.

I am just 18 years old and he is 29 although his face doesn't reflect so. First of all, he used my image without my knowledge and consent for his own benefit of publicity. He used this as a means to glorify his image in @BJP and social media. @CyberDost

My loyalty for him was doubted to the extent that he clarified many times what was I doing even when I was in the bathroom. I had to show him each and everything I did on my phone or he would snatch my phone away. He never respected my personal space. @NCWIndia

I seriously doubt if his feelings were true for me. Is this what a #modibhakt does in the name of bhakti?? @dna @ABVPGujarat #NamoAgain

Speaking to Indiatimes, Alpika placed scores of allegations against Jay Dave and his family. "He won't allow me to speak to my parents and I had to text to my mother about my problems from the bathroom so that he won't know," she said.

Alpika said she underwent a lot of physical abuse and emotional trauma before she decided to leave Jay. She is right now staying with her parents in Bengaluru and she has been facing severe pressure from her in-laws to delete her tweets.

Alpika also made it clear that she still is a Modi supporter and it has got nothing to do with her personal life.

For those of you who are thinking I dislike Modi or I'm blaming Modi for whatever is happening in my personal life, let me tell you, that is not the case. I am and always will be a desh bhakt and a BIG fan of Modi ji. But I'm against those who use his name for publicity. pic.twitter.com/6LxTUpRiQH

Stay up to date on all the latest Nation news with The New Indian Express App. Download now
(Get the news that matters from New Indian Express on WhatsApp. Click this link and hit 'Click to Subscribe'. Follow the instructions after that.)
TAGS
Alpika Pandey Jay Dave Narendra Modi