The twelfth edition of the annual Jaipur Literature Festival, ended on Monday.  The Festival had over 500 speakers from around 30 countries and over 250 sessions.

The twelfth edition of the annual Jaipur Literature Festival, ended on Monday.  The Festival had over 500 speakers from around 30 countries and over 250 sessions. A plethora of conversations, debates and dialogues covered topics covered a range of topics such as war, espionage, intelligence, politics, environment and climate change. The heritage property of Diggi Palace, located in the heart of the Pink City, was the landing place for the lovers of books and literature during the weekend. 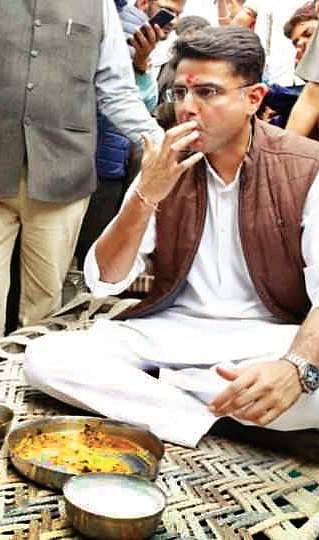 A 28-year-old man, identified as Rahul Dixit, an aspiring model and TV actor from Jaipur was found dead under under mysterious circumstances at his rented home in Mumbai on Wednesday. It is suspected that he committed suicide but his family members allege that his girlfriend was responsible for his death and go so far as to claim Rahul may have been murdered. Rahul’s father, Mahesh Dixit has accused the girl on the basis of a series of Facebook updates that Rahul had posted. He was allegedly living with the girl and there had been some drama over their wedding, which was finally scheduled for December. “My son cannot commit suicide. He has been killed,” said Mahesh.

Political similarities between Pilot and Raje

Residents of Rajasthan can’t seem to be getting enough of drawing comparisons between former Chief Minister Vasundhara Raje and current Deputy Chief Minister Sachin Pilot. So when Pilot stopped in the village of Arnia kedar in his constituency and shared a simple meal with the villagers, locals could not help but reminisce about Raje’s meals with citizens on electorally pivotal days. She shared a meal in a village in her constituency on the day of voting for Assembly elections in December 2018. The similarities however, don’t stop there. Both sport stellar political lineages and are highly educated from premier educational institutes of the country.

On Sunday , 52 thousand runners ran the 10th AU bank Jaipur Marathon. The massive congregation assembled in front of Albert Hall while thousands others were watching and cheering. “Mera Jaipur, Our Jaipur, Clean Jaipur, Fit Jaipur,” were slogans that echoed in one voice from across the croad. On the behalf of the Culture Youth Organization and World Trade Park, the 10th AU Bank Jaipur Marathon saw many such scenes, which made one year’s hard work of the organisers memorable on Sunday morning. Amazingly, the marathon saw 9 World Records made.