Trial court judges to be trained in data management

The step comes days after the Ministry of Law and Justice wrote to all district courts for not sending the updated case details on daily basis.

fffffffffffffffffffQQNEW DELHI: With an aim to bring more transparency and accountability in the conduct of judicial affairs in the country, judges in the trial courts across the country are being trained in data management so that information collected at district levels could be synced with the data collected centrally.
The step comes days after the Ministry of Law and Justice wrote to all district courts for not sending the updated case details on daily basis. 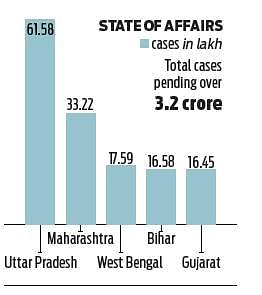 As many as 1,000 district and subordinate courts aren’t updating data regularly, according to the ministry.
Under the District Courts Monitoring System (DCMS), which is used for assessing the performance of each judicial officer, every judge needs to enter the day’s work on the web-based application on a daily basis by 4.45 pm by themselves or in their presence, regularly, without fail.
The data entered will then be reviewed by the District and Sessions Judge and then the same will be forwarded to the National Judicial Data Grid (NJDG).
The NJDG gives daily status report of each court on cases filed, disposed of, under objection and status of those pending for more than two years, five years or 10 years.

The NJDG also has details of cases filed by women and senior citizens in respect of each of these courts and the progress of proceedings on a day-to-day basis.
As part of its ongoing implementation of the second phase of e-courts project, which is  being monitored by the Supreme Court’s e-committee, government has started giving unique IDs to all judges.
Judges with unique IDs will have to specify the nature of proceedings on a daily basis in the online log sheet, whether he delivered judgment, reserved it or no business took place.