After PM Modi’s pep talk, security forces to continue ‘Operation All Out’ in Valley

IG (Operations) CRPF, Zulfikar Hussain said that anti-militant operations will continue, adding that there will be no let up in the heat against militants.

NEW DELHI: A day after Prime Minister Narendra Modi said that he will break the backbone of militancy in Jammu and Kashmir, security forces on Monday said that ‘Operation All Out’ will continue in the Valley. 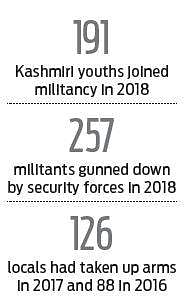 “We will tackle every terrorist in a befitting way. We will break the backbone of terror in Jammu and Kashmir and fight it with all our might,” Modi had said in Srinagar on Sunday.

IG (Operations) CRPF, Zulfikar Hussain said that anti-militant operations will continue, adding that there will be no let up in the heat against militants.

A security official said that the PM’s statement would give impetus to anti-militancy operations. “We will now conduct operations with vigour to end militancy,” he said.

Meanwhile, the National Investigation Agency (NIA) on Monday arrested a Jaish-e-Mohammad terrorist in connection with the attack on a CRPF camp in Jammu and Kashmir’s Lethpora, according to an official statement.

The accused, Fayaz Ahmad Magray, is an active OGW (over ground worker) of proscribed terrorist organisation Jaish-e-Mohammad (JeM), it said.

He is a key conspirator who provided logistical support such as providing shelter to the terrorists and conducting reconnaissance of the CRPF group centre in Lethpora before the terrorist attack, the NIA said in the statement.

Stay up to date on all the latest Nation news with The New Indian Express App. Download now
(Get the news that matters from New Indian Express on WhatsApp. Click this link and hit 'Click to Subscribe'. Follow the instructions after that.)
TAGS
Modi Jammu and Kashmir