The West Bengal government also stepped up its attack on the Modi government in the wake of the foiled CBI raid.

KOLKATA: West Bengal Chief Minister and Trinamool Congress supremo Mamata Banerjee on Monday said that she was ready to die to save Kolkata Police Commissioner Rajeev Kumar, who CBI sleuths tried to interrogate on Sunday in connection with a chit fund scam case. 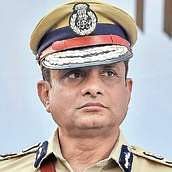 While the bid was foiled and the CBI team was whisked away to a police station, Mamata sat on an indefinite dharna protesting against what she called an operation at the behest of “Modi, Shah and Doval”.
After launching her dharna at 1.30am on Monday, the chief minister held a cabinet meeting, addressed farmers through Facebook live and awarded medals to police officers, all from her dharna site at Metro Channel in central Kolkata.

“Chit funds have existed since 1980, but there was no probe. We caught the guilty from Kashmir. We set up an SIT, we set up a judicial commission. These people (BJP leaders) are calling Rajeev Kumar a thief.  Even I am being called a thief. Whose money have I stolen? I am ready to give my life for such people. I did not protest when my party people were harassed,” Mamata said.

However, she clarified that the battle is not against CBI, but against the Narendra Modi-led BJP government. Mamata Banerjee was flanked by the city police chief and top Trinamool leaders and ministers at the site of the dharna under the banner, ‘Save India, Save Constitution Satyagraha’. The dharna is likely to continue till February 8 when board exams are expected to begin.

The West Bengal government also stepped up its attack on the Modi government in the wake of the foiled CBI raid. On the day the CBI moved the Supreme Court claiming that the Mamata regime was impeding its probe into the allegation against Kumar, the state government knocked on the doors of Calcutta High Court claiming that the agency did not have necessary documents to conduct the raid. In what is being seen as an act of retaliation, the state government has sent a notice to CBI joint director Pankaj Srivastava in a `45 lakh duping case.

Stay up to date on all the latest Nation news with The New Indian Express App. Download now
(Get the news that matters from New Indian Express on WhatsApp. Click this link and hit 'Click to Subscribe'. Follow the instructions after that.)
TAGS
Rajeev Kumar Kolkata police commmissioner Mamata Banerjee