10 maoists killed in encounter with security forces in Chhattisgarh's Bijapur

The encounter took place around 11 am in a forest in Bhairamgarh police station area when a joint team of the Special Task Force and the District Reserve Guard was out on an anti-Naxal operation.

RAIPUR: In the first major success in anti-Maoist operations this year, security forces in Chhattisgarh on Thursday gunned down at least ten Maoists in the forests of Bhairamgarh in conflict-ridden district of Bijapur, around 350 km south of Raipur.

Bijapur district Superintendent of Police Mohit Garg said they carried out the operation on the basis on a tip-off that a training camp was being organised across the Indravati river in the Abujhmad area. The region has a dense forest cover and is cut-off communication-wise.

“On Wednesday evening, a joint team of the Special Task Force (STF) and district reserve guards (DRG) left on a search operation. At around 11 am on Thursday, an exchange of fire resulted when the troopers were about to reach the camp of the rebels. At least 10 bodies of Maoists in uniform have been recovered besides 12 weapons, a huge cache of IED explosives and other items from the demolished camp,” Garg said.

The joint security team comprised of around 200 personnel, while according to the information received by the police, there were 40-50 Maoists at the camp.According to the district police chief, the encounter continued several hours. The number of casualties among the rebels was still being confirmed at the time this publication went to the Press. Additional forces had been deployed for an intensified search operation.

“There was no report of any casualty sustained by the forces, who are yet to return to their base camps with the recovered bodies. It’s a big success this year for those who have carried out an intelligence-based operation,” said Chhattisgarh director general of police D M Awasthi.

This is the second major operations mounted by the state’s security forces this week. Three days ago, a joint operation was launched in the region by police forces of three districts- Bijapur, Dantewada and Narayanpur. However, no concrete success was reported, the DGP said.Home Minister Tamradhwaj Sahu congratulated the security forces.Bijapur is among the seven worst Maoists-affected districts in the conflict zone of Bastar. 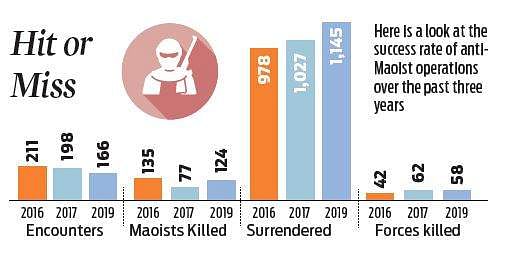 Stay up to date on all the latest Nation news with The New Indian Express App. Download now
(Get the news that matters from New Indian Express on WhatsApp. Click this link and hit 'Click to Subscribe'. Follow the instructions after that.)
TAGS
Naxal Encounter Chhattisgarh Bijapur