Mayawati has to deposit money used for erecting her statues: Supreme Court

The remarks were made by a bench hearing a petition filed by an advocate who had contended that public money cannot be utilised for creating own statues and for propagating the political party.

NEW DELHI:  in a major setback for BSP chief Mayawati, the Supreme Court on Friday said she may have to pay back the public money used for erecting statues of herself and elephants, the party’s symbol, at parks in Lucknow and Noida. The apex court made the strong remark while hearing a petition that alleged `2,000 crore was used from the state budget for 2008-09 and 2009-10, when Mayawati was the Chief Minister of Uttar Pradesh, for stalling her statues and BSP’s symbol at different places. 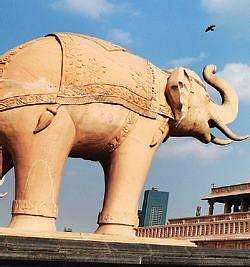 A bench headed by Chief Justice Ranjan Gogoi said, “Ms Mayawati, pay all the money back. We are of the view that Mayawati should reimburse all the money she spent. We are of the tentative view that Mayawati has to deposit the public money spent on her statues and party symbol to the state exchequer. The bench, however, clarified that this was only their ‘tentative view’ and matter would take some time for hearing.  The matter has been posted for final hearing on April 12.

An advocate had filed a petition in 2009, saying public money cannot be utilised for creating own statues and for propagating the political party. On May 29, 2009, the court had issued show cause notice to the Uttar Pradesh government and Mayawati for using the public money for installing the statues.

Not a new controversy
Acting on a Supreme Court directive, the Election Commission had in 2012 ordered the statues of Mayawati and elephants be covered during the Assembly polls so that she does not get political mileage

Stay up to date on all the latest Nation news with The New Indian Express App. Download now
(Get the news that matters from New Indian Express on WhatsApp. Click this link and hit 'Click to Subscribe'. Follow the instructions after that.)
TAGS
Supreme Court Mayawati BSP Mayawati Statues