The Jharkhand government seems to be cracking the whip on defaulting lease holders of mines in the state.

RANCHI:  The Jharkhand government seems to be cracking the whip on defaulting lease holders of mines in the state. Senior functionaries in the government said on Friday that it has cancelled 12 iron ore mining leases and a further six leases are under investigation for violating the conditions of their lease deeds. A functionary said the 18 mining companies had been issued notices during 2016-17 for several irregularities found in their functioning. 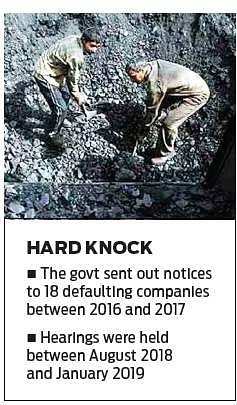 While some companies had not started any work at all, some others were found regularly violating the rules of their deeds. All 18 companies were found to be operating in the regions of Noamundi, Badajamda and Karampada areas of the Saranda Forest in West Singhbhum.

“All the 18 lease holders were served a 60-day legal notice to reply after the District Mining Officer observed that they were violating the conditions of lease deed, following which, a hearing took place by a committee of revenue officials headed by Additional Chief Secretary (Forest), during which, all of them were given a chance to prove their points. On the basis of the outcome of that hearing, lease of 10 iron ore mines so far have been cancelled, while the process for cancellation of two others have also been initiated,” said Mining Director Jishan Kamar.

The hearings took place over a period of time from August 2018 and continued till January this year, he added. “In the rest of the cases, some things were not clearly established and hence they have been asked to submit some additional documents, on the basis of which, action could be taken against them, if sufficient evidence is found,” said Kamar.

He added that fresh mining leases would be up for auction once again, although he could not say when the auction would take place. Notably, the Opposition Congress had lodged a complaint with the Anti-Corruption Bureau (ACB) last year against Advocate General Ajit Kumar and the then District Mining Officer of West Singhbum claiming that the duo was misguiding the Jharkhand High Court in connection with the payment of a `250 crore penalty imposed on the Shah Brothers (one of the defaulting operators) by the deputy commissioner.