After the SP came to 2012, CM Akhilesh Yadav ordered a probe into the alleged scam.

LUCKNOW:  The Uttar Pradesh memorial scam worth Rs 1,400 crore was busted in 2012 when the state police conducted a preliminary inquiry into a complaint of financial irregularities in the construction of 14 memorials of Dalit icons between 2007 and 2012.The entire project was worth over Rs 59,000 crore. Mayawati, the then chief minister, had created a corpus fund of Rs 200 crore in 2010 for the expenses incurred on functions organised on the birth and death anniversaries of the dalit icons. Her government had also set up a 6,000-strong army of maintenance staff.

After the SP came to 2012, CM Akhilesh Yadav ordered a probe into the alleged scam. The inquiry, conducted by then Lokayukta N N Mehrotra, detected anomalies at every step — from rigging of tenders to over-pricing of construction sandstone used for the statues and stupas and under-payment to construction workers.

Massive irregularities were also found in installation of statues, electrification and plantation.
The Lokayukta indicted 199 persons, including then PWD minister Naseemuddin Siddiqui and mining minister Babu Singh Kushwaha along with bureaucrats, engineers and contractors. 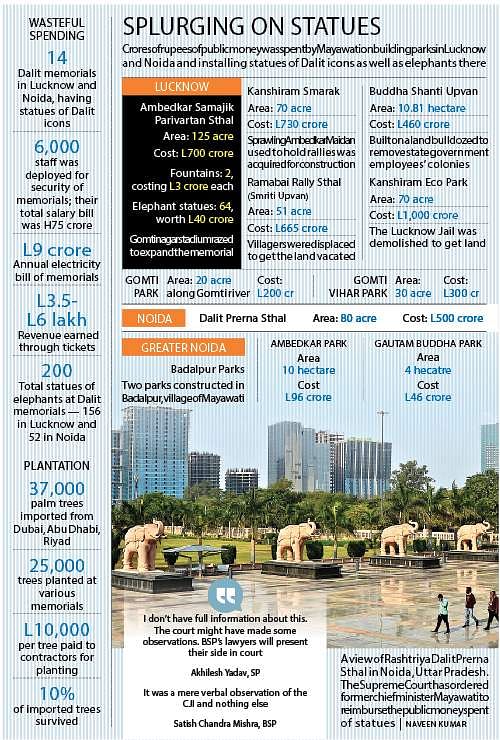 Stay up to date on all the latest Nation news with The New Indian Express App. Download now
(Get the news that matters from New Indian Express on WhatsApp. Click this link and hit 'Click to Subscribe'. Follow the instructions after that.)
TAGS
Lokayukta