Kolkata Police Commissioner Rajeev Kumar was grilled for more than eight hours by sleuths of the Central Bureau of Investigation in Meghalaya capital Shillong on Saturday.

SHILLONG: Kolkata Police Commissioner Rajeev Kumar was grilled for more than eight hours by sleuths of the Central Bureau of Investigation in Meghalaya capital Shillong on Saturday. His lawyer Biswajit Deb, however, claimed Kumar was not interrogated as he is not an accused in the multi-crore Saradha chit fund case.“He is here to share information with the CBI,” Deb said, adding, “He has cooperated before and he is doing it now.” 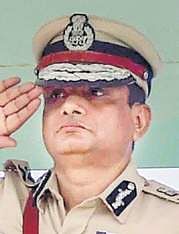 Escorted by Meghalaya Police and accompanied by Kolkata Additional Commissioner of Police Jawed Samim, Deputy Commissioner (Special Task Force) Murlidhar Sharma and Deb, Kumar arrived at the office of CBI at Oakland in the picturesque hill station at 10.45 am and left at 7.20 pm in a convoy of police vehicles. He will be subjected to interrogation again on Sunday.

Around 4 pm, former Trinamool Congress Rajya Sabha member, Kunal Ghosh, an accused in the case who was incarcerated and now out on bail, arrived in the city after being summoned by the CBI. There is a possibility that he will be questioned together with Kumar on Sunday.

The interrogation is being headed by a 10-member team of CBI officials who came from Delhi, Lucknow and Bhopal. There were also at least two officials from the agency, including the investigating officer of the case, from Kolkata.

Kumar arrived in the state on Friday and is staying at Tripura Castle, a luxurious hotel. He had earlier headed a probe into the case by a special investigation team of Kolkata Police and is accused of destroying evidence. Recently, the Supreme Court had ordered him to cooperate with the CBI after the agency had alleged that he ignored its summons.

The direction followed the recent unprecedented bundling of a team of CBI officers which went to interrogate Kumar at his official residence, into a car by Kolkata Police.

Questioning to continue in Shillong

The CBI will continue to question Rajeev Kumar on Sunday. He is likely to be interrogated along with former TMC MP Kunal Ghosh, an accused in the Saradha scam, who has been summoned to Shillong

Stay up to date on all the latest Nation news with The New Indian Express App. Download now
(Get the news that matters from New Indian Express on WhatsApp. Click this link and hit 'Click to Subscribe'. Follow the instructions after that.)
TAGS
Kolkata Police Commissioner Rajeev Kumar CBI vs Mamata