In January, Union Home Minister Rajnath Singh had announced with confidence that India will complete its part of the Kartarpur Corridor “before Pakistan does”.

Perhaps, the minister spoke a little too early. Officials in Pakistan claim that nearly 40 per cent of the work on their side of the corridor has been completed while on the India side, even the land acquisition process has not been completed.

While announcing the project in November 2018, both India and Pakistan had claimed that the corridor would be ready for opening on the 550th birth anniversary of Guru Nanak in November this year. The authorities in Pakistan claim that the construction work is going on round-the-clock. Work is underway for laying the roads from the gurdwara to the proposed immigration terminal at the border and extension of the gurdwara. 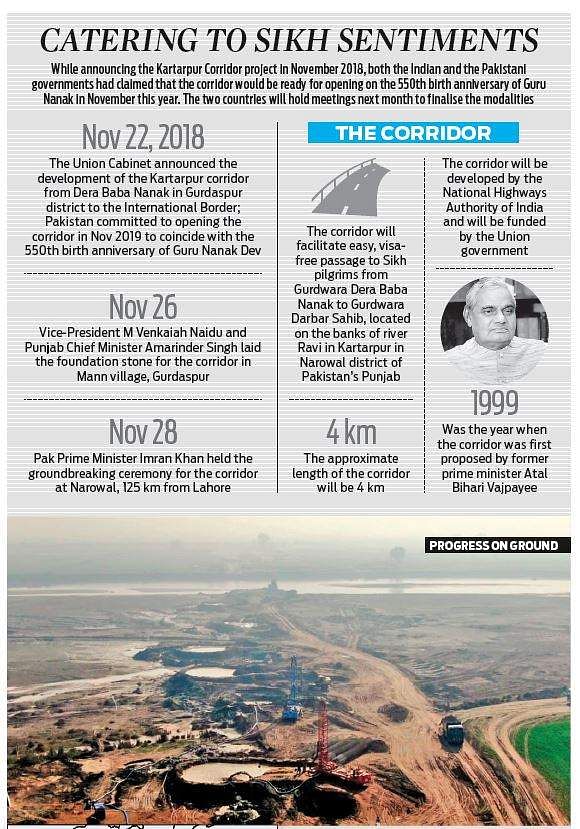 The bed of a 1.10-km road has been completed from Darbar Sahib to river Ravi while the bridge on the Ravi is under construction. Work on the 2.25-km road from the river to the International Border has, however, not yet started, said sources. They added that the local administration in Narowal has written to the higher authorities for acquiring 1,076 acres of land.

On the Indian side, construction work is yet to begin. The Ministry of Road Transport and Highways had on January 23 issued a notification under Section 3 of the National Highways Act, 1956, for the acquisition of land in four villages — Chandu Nangal, Jaurian Khurd, Pakhoketahli Sahib and Dera Baba Nanak. “The land acquisition process is in second stage of progress and will be completed by March,” said an official.

ALSO READ | Kartarpur spawns demands for opening of other religious corridors in Punjab, Jammu and Kashmir

The National Highways Authority of India (NHAI) issued a fresh notification on January 31 for the acquisition of land for the Integrated Check Post (ICP) at Dera Baba Nanak, giving farmers time to submit their objections, if any, til February 26. Earlier, the NHAI had completed its survey in the area to demarcate the passage up to the International Border for the corridor.

The NHAI has to acquire 45 hectares of land for the corridor as well as the ICP. While the battle between the SAD-BJP and the Congress over credit for the corridor refuses to die down, the alleged delay in starting the construction has also triggered a political slugfest in Punjab now. 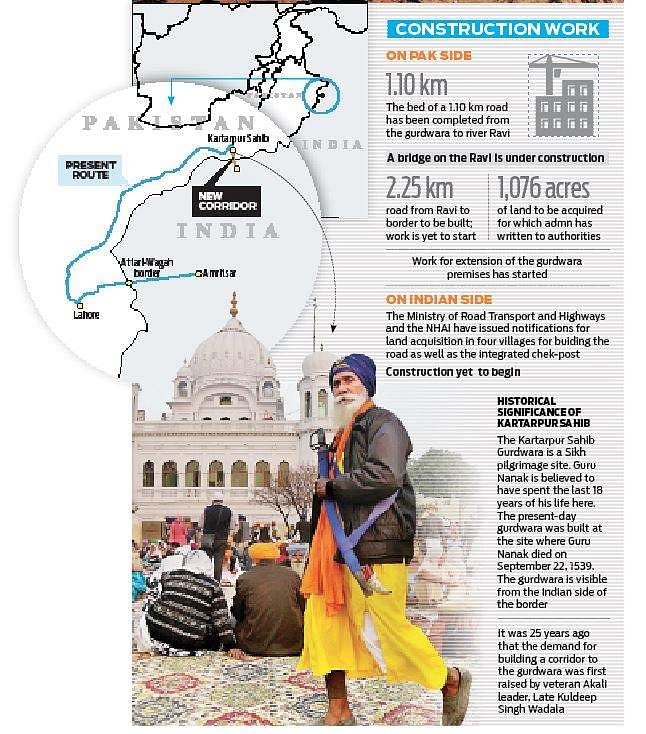 “There is a prolonged delay in acquiring land for the project and nobody knows when the actual construction will begin. We fear that the project may not be completed before the November deadline,” said senior BJP leader Rajinder Mohan Singh Chinna.

Shiromani Akali Dal (SAD) leader Daljeet Singh Cheema said, “The project should be completed as soon as possible. The state government should fully cooperate with the Union government which is sincerely working hard to get the project started. The work on the corridor should start before the model code of conduct for parliamentary elections kicks in. Otherwise, the project will get delayed.”

The Congress, however, blamed the Centre for the delay. “Despite all the public assurances and rhetoric, nothing concrete worth mentioning has happened on the ground. It’s high time the NDA government did something rather than raising the irrelevant issue of blaming the Congress for allowing the Kartarpur gurdwara to go to Pakistan during Partition,” said state Congress general secretary Amardeep Singh Cheema.

Although the pace of work on the ground may appear a little slow, the Union government is rushing to finalise the modalities with Pakistan as early as possible and plans to share the draft agreement within a month.

Last month, Union Home Secretary Rajiv Gauba had chaired a high-level meeting in New Delhi where it was deliberated upon that the devotees will have to obtain a permit slip for visiting the gurdwara. The meeting was attended by Punjab Chief Secretary Karan Avtar Singh, Indian High Commissioner to Pakistan Ajay Bisaria and NHAI officials, among others. Land acquisition for the road and the integrated check post were the other issues discussed at the meeting.

Sources said that the permit slip will be issued for the entry, but passport would also be required for visiting the shrine.

Two other important clauses that will reportedly be added to the draft agreement being prepared by the Union government are that non-Sikh devotee will also be allowed to visit the gurdwara and that individual pilgrims will also be allowed, and just not groups.

Last month, India had also shared with Pakistan the coordinates of the crossing point of the Kartarpur corridor.

A delegation from Pakistan will visit India on March 13 for discussions on the modalities with officials of Ministry of External Affairs while an Indian delegation is expected to travel for follow-up talks on March 28.

The Indian government has also proposed technical-level discussions between engineers of both countries without waiting for the discussion on the modalities.

Stay up to date on all the latest Nation news with The New Indian Express App. Download now
(Get the news that matters from New Indian Express on WhatsApp. Click this link and hit 'Click to Subscribe'. Follow the instructions after that.)
TAGS
Kartarpur Corridor Gurdwara Darbar Sahib Guru Nanak Dev