Amit Shah accused Chandrababu Naidu of breaking their trust and said he is going too far by personally attacking PM Narendra Modi.

VIJAYAWADA:   On a day when Chief Minister N Chandrababu Naidu took his fight against the Centre to Delhi by staging Dharma Porata Deeksha in AP Bhavan, BJP national president Amit Shah shot off a letter addressed to the people of AP castigating Naidu for spreading lies, carrying a hate campaign against the Centre and listing out in detail the assistance extended by the Centre to the State in the past four-and-a-half years. 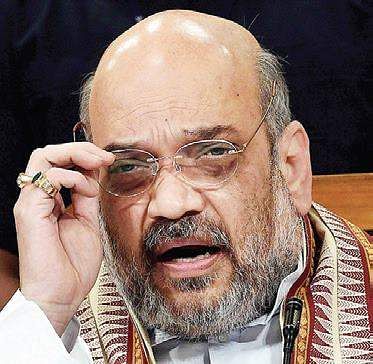 “Naidu is back to theatrics and histrionics. His desperation for grabbing headlines is understandable as he is aware that his political fortunes are declining rapidly,” Shah said referring to Naidu’s ‘deeksha’. Shah said Naidu has Congress blood in him, “but we never expected that the AP CM will go to the extent of surpassing the Congress in speaking lies and untruths and in carrying a hate campaign against the Prime Minister and the BJP.

“Naidu knows that he has lost credibility among the people of AP and is announcing a series of sops to woo different sections. Sensing defeat in polls and making multiple U-turns, he is carrying out a malicious propaganda against the Centre and BJP to divert people’s attention from his failures. Naidu is going to the extent of personally attacking Prime Minister Narendra Modi and did not have the courtesy to receive the PM when he came to the State,” Shah said.

The BJP chief reminded that Naidu had hailed the special package announced by the NDA government on the floor of the Assembly, but had now made a complete U-turn and is demanding SCS for the State now. The BJP chief said the NDA had to its credit of transferring seven mandals from Telangana to AP, according national status to Polavaram Project and handing over the project to the AP government at Naidu’s request, which was unprecedented.

He said Naidu is now panicking that his omissions and commissions would be exposed. He even going to the extent of accepting the leadership of the Congress, which has ruined the country, compromised the integrity of every institution and is neck-deep in scams.

It’s fight for justice: CM
Reacting to Shah’s letter, Naidu said, “How can you expect me to welcome a PM to my State when he fails to fulfill the promises made to AP,” he said. On his alliance with the Congress, Naidu said he is in a fight for justice and his fight is only for the interest of the nation. He said the BJP chief is “hitting me below the belt”. The PM and Shah have to maintain decorum.

Stay up to date on all the latest Nation news with The New Indian Express App. Download now
(Get the news that matters from New Indian Express on WhatsApp. Click this link and hit 'Click to Subscribe'. Follow the instructions after that.)
TAGS
Chandrababu Naidu Amit Shah BJP