NEW DELHI: Only five per cent of the allocated funds have been spent for construction of roads under the Pradhan Mantri Gram Sadak Yojana (PMGSY) in Left Wing Extremism (LWE) affected areas, data from the ministry of rural development revealed.

According to the data, of the J1,121 crore allocated in 11 LWE affected states, only Rs 5.43 crore has been spent. In States like Jharkhand, Maharashtra, Odisha and Telangana, not even a single rupee has been spent of the allocated Rs 246 crore, Rs 57 crore, Rs 97 crore and Rs 136 crore respectively.

Ministry officials attribute the lackluster performance to constant hindrance by Naxals. “We know that Maoism is a problem associated with development activities. Sometimes, the roads made have been blown up and other times there is lack of contractors due to the Naxal threat. Hence, there is a delay in construction of the roads,” a ministry official said.

However, the ministry data says that a total of 2,461 habitations have been connected in LWE affected areas through the programme. While 1,022 habitations have got roads in Bihar under the scheme, Odisha and Jharkhand have seen connections of 653 and 453 habitations respectively.

The PMGSY is a programme that was launched with the aim to connect rural habitations which have a minimum population of 250 households. The programme has exemptions for special areas like tribal belts, mountainous regions and N-E states.

The long and short of it 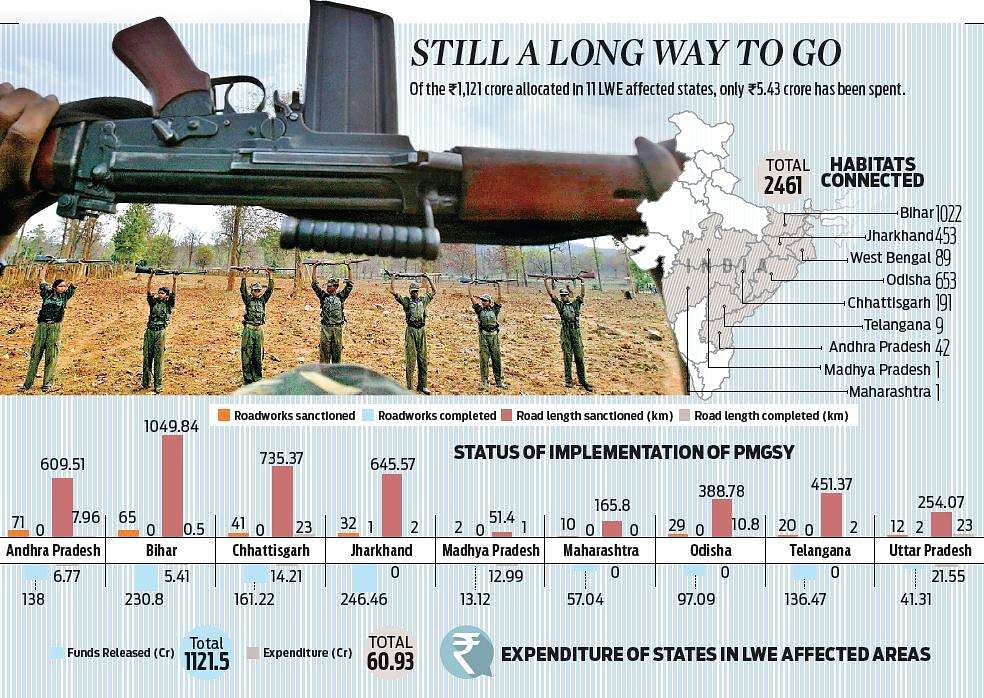 Stay up to date on all the latest Nation news with The New Indian Express App. Download now
(Get the news that matters from New Indian Express on WhatsApp. Click this link and hit 'Click to Subscribe'. Follow the instructions after that.)
TAGS
rural road construction Left Wing Extremism Pradhan Mantri Gram Sadak Yojana