The BJP-ruled North Delhi Municipal Corporation, which is on the back foot, constituted a committee in the wake of the incident and promised strong action against those found guilty.

NEW DELHI: The fire tragedy which claimed 17 lives and shook the capital on Tuesday has woken up the authorities from deep slumber.

The BJP-ruled North Delhi Municipal Corporation, which is on the back foot, constituted a committee in the wake of the incident and promised strong action against those found guilty.

"The report would be submitted to us in three days. As per my visual inspection, the exit of the hotel was closed. The owners have an NOC (No Objection Certificate) from the fire department, on the basis of which the health department issued a licence to run the hotel and restaurant," said Adesh Gupta, Mayor, North DMC.

However, according to sources, the hotel, which was issued the licence in 2017 for three years, was protected under the Special Provision Act, which was passed by the Lok Sabha in 2017 to protect unauthorized constructions from demolition. 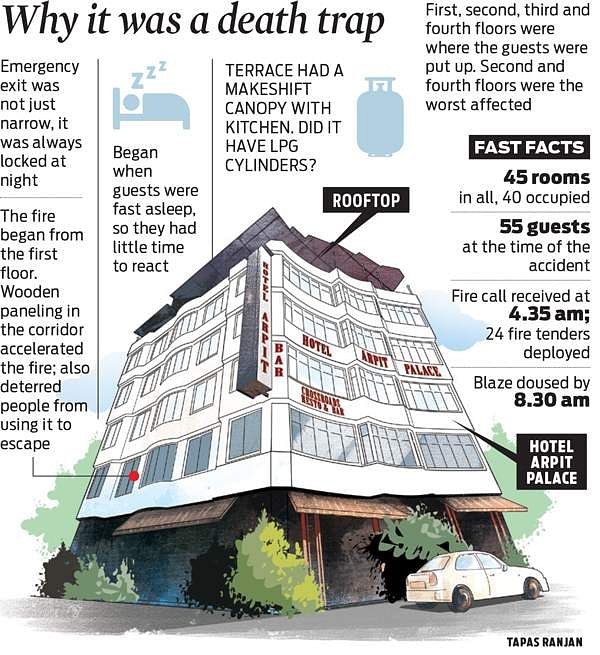 This is not the first major incident of fire in overcrowded areas, and Hauz Khas Village and Sadar Bazar have suffered fires. The fire department has always objected to vendors crowding narrow lanes, which hinders firemen in performing their duty in the event of a fire. Moreover, 40 per cent of the positions of firemen are vacant in the Delhi Fire Service. What is even more worrying is that there are 57,00,000 buildings listed in Delhi, but as per the fire department, two years ago only 20,000 had a No Objection Certificate (NOC).

"The sanctioned strength of firemen in DFS is 2,367, but the service has to manage with 1,253 firemen, with a shortage of 1,114 firemen. We do have a huge requirement of firemen," said Chief Fire Officer Atul Garg.

The task of the DFS has been made more difficult by the order of the National Green Tribunal banning vehicles older than 15 years from plying on the roads in the national capital. According to sources, there are around 100 such vehicles which cannot be used on the roads. The DFS has requested the NGT to make an exception for them as replacing such a large number of fire vehicles would require considerable financial resources.

Stay up to date on all the latest Nation news with The New Indian Express App. Download now
(Get the news that matters from New Indian Express on WhatsApp. Click this link and hit 'Click to Subscribe'. Follow the instructions after that.)
TAGS
Delhi fire tragedy Hotel fire North Delhi Municipal Corporation