Jammu and Kashmir: Outrage as 43 jawans killed in Jaish terror attack at Pulwama

Thirty-six other jawans are battling for their lives in hospital. The Jaish-e-Mohammed (JeM) claimed responsibility for the attack.

RINAGAR/NEW DELHI: In a first-of-its-kind attack in Kashmir, an SUV packed with explosives targeted a convoy ferrying Central Reserve Police Force (CRPF) jawans of the 76 Battalion from Jammu to Srinagar, killing at least 43 soldiers on Thursday. Thirty-six other jawans are battling for their lives in hospital. The Jaish-e-Mohammed (JeM) claimed responsibility for the attack.

The attack points to a serious lapse in security, as intelligence inputs on a “big car bomb attack” in Kashmir were picked up via phone intercepts between cadre of the Lashkar-e-Toiba and JeM. Intelligence inputs about fidayeen attacks had also increased recently, said a security official on condition of anonymity.

Jammu and Kashmir Governor Satyapal Malik agreed there had been security lapse. “Defnitely, there was a lapse. Security forces would now have to sit together, analyse and take measures to plug such loopholes,” he said, while promising India would give ‘specific and strong response’ to the terror attack.
The blast at Lethpora, 22 km from Srinagar, blew the bus to smithereens spewing human remains all over the four-lane highway. Shortly after the explosion, unidentified gunmen opened fire at the convoy injuring more security personnel.

In a video of the suicide bomber, Adil Ahmad Dar, uploaded on social media hours after the blast, the attacker appears calm and is heard issuing warnings.

Prime Minister Narendra Modi condemned the attack on the convoy. “Sacrifices of our brave security personnel shall not go in vain. The entire nation stands shoulder to shoulder with the families of the brave martyrs. May the injured recover quickly,” he said.

TIMELINE: Major terror attacks on security forces in Jammu and Kashmir since 1999

The external affairs ministry hit out at Pakistan for exporting terrorism to India. Home Minister Rajnath Singh will visit Srinagar on Friday to take stock of the situation. Home Secretary Rajiv Gauba, who reached Thimpu, Bhutan earlier in the day for the annual Secretary-level talks, decided to rush back. A 10-member NIA team is on the way to Srinagar and the Cabinet Committee on Security will meet on Friday morning, sources said. 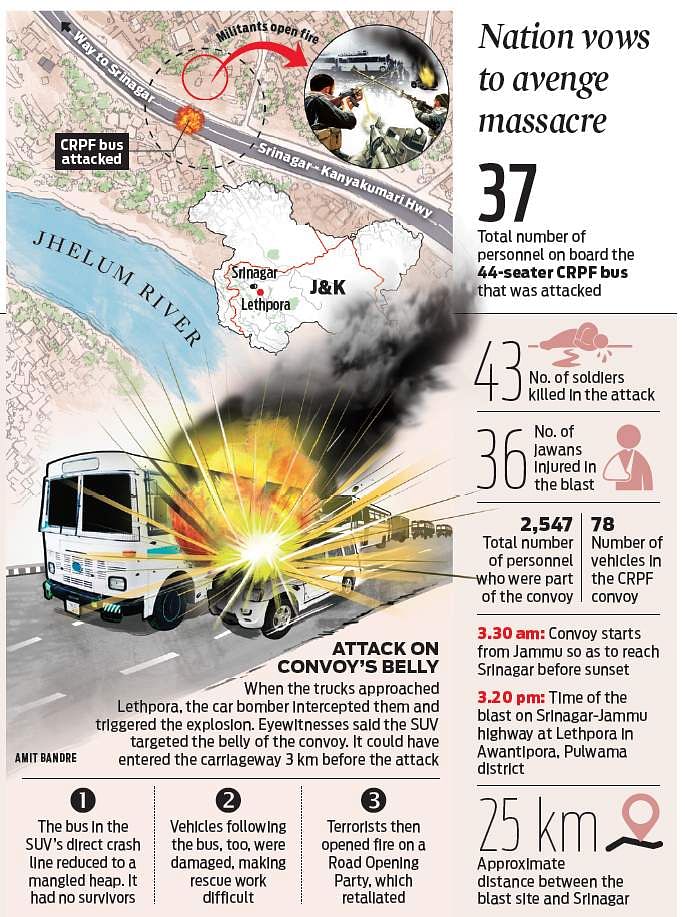 Stay up to date on all the latest Nation news with The New Indian Express App. Download now
(Get the news that matters from New Indian Express on WhatsApp. Click this link and hit 'Click to Subscribe'. Follow the instructions after that.)
TAGS
CRPF Jammu and Kashmir Jaish-e-Mohammed Pulwama Terror Attack