Pulwama terror attack: 16-year-old SOPs for troop movement to be reviewed, civilian vehicles won't be allowed to move around convoys

Since 2003, civilian vehicles are allowed to move on highways during convoy movement and are even allowed to overtake the vehicles of security forces.

NEW DELHI: The suicide attack on the CRPF convoy has prompted security forces to revise the Standard Operating Procedures (SOPs) being followed since 2003 for movement of troops. Civilians will no longer be free to move around during convoy movement, Union Home Minister Rajnath Singh announced on Friday.

Since 2003, civilian vehicles are allowed to move on highways during convoy movement and are even allowed to overtake the vehicles of security forces.

Though Thursday’s attack has been the worst in the Valley in recent past — recording the highest number of deaths in a single terror attack in over three decades — security forces’ convoys have often been targeted in the past. 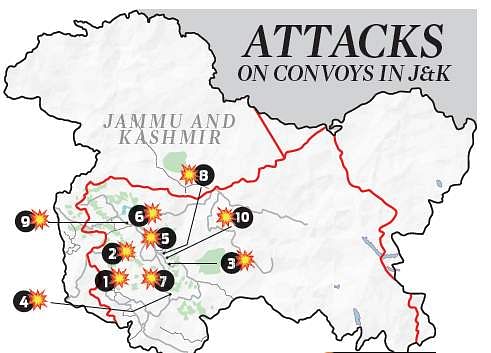 Thursday's attack brings to limelight vulnerability of security forces on roads, security officers said, revealing there have been 10 attacks on convoys since 2013 in Kashmir and stressing on the need to airlift troops.

Sources said that concerns of security officers were also conveyed to Singh who said the request will be looked into.  J & K Transport commissioner SP Vaid, also former police chief of the state, said he had even made a proposal for security forces to be airlifted.

“The transit alone takes a lot of time, especially when the roads are closed for weeks. This exposes the soldiers for a prolonged duration. I had proposed to airlift the jawans during a high-level security meeting of joint forces more than once, and also spoke about it to representatives of state and Union governments,” Vaid said.

Meanwhile, a senior official confirmed that all the movement of security forces was cancelled till authorities could come up with a different set of plans.

“Earlier the movement of security forces in convoys was kept separated. The civil vehicle was either restricted or had a separate time for movement. The aim was to keep the body of troops safe” added the officer.

Army remains strict about its convoy movements. It does not allow, even in extreme cases to exceed the number of vehicles beyond 21.

Security analyst JK Verma found a new dimension in the attack.“Such attacks have been common in Afghanistan. It is an important dimension and we will have to plan everything in such a way that we trap such attackers and eliminate them.”

All the persons this paper spoke to favoured stopping the movement of the civil vehicle as the Kashmir remains an important place for the forces.

Stay up to date on all the latest Nation news with The New Indian Express App. Download now
(Get the news that matters from New Indian Express on WhatsApp. Click this link and hit 'Click to Subscribe'. Follow the instructions after that.)
TAGS
Pulwama Terror Attack