Alcohol was found to be the most commonly abused psychoactive substance among interviewees.

NEW DELHI:  Access to treatment for those dependent on alcohol remains dismal in the country with only one in 38 receiving any care and only one in 180 getting access to rehabilitative care or hospitalisation, shows the ‘Prevalence and Extent of Substance Use in India’ report of a study conducted by the Ministry of Social Justice and Empowerment and AIIMS’ National Drug Dependence Treatment Centre (NDDTC).

The report, a copy of which was reviewed by this correspondent on Monday, said among people dependent on illicit drugs, one among 20 has access to rehabilitation or hospitalisation.

Alcohol was found to be the most commonly abused psychoactive substance among interviewees. The study sought to gauge the dependence in the country on a range of illicit substances which include cannabis (bhang and ganja/charas), opiods (opium, heroin and pharmaceutical opioids), cocaine, amphetamine-type stimulants, sedatives, inhalants and hallucinogens. “The report points towards the huge treatment gap that currently exists,” said Dr Atul Ambekar, professor, NDDTC. 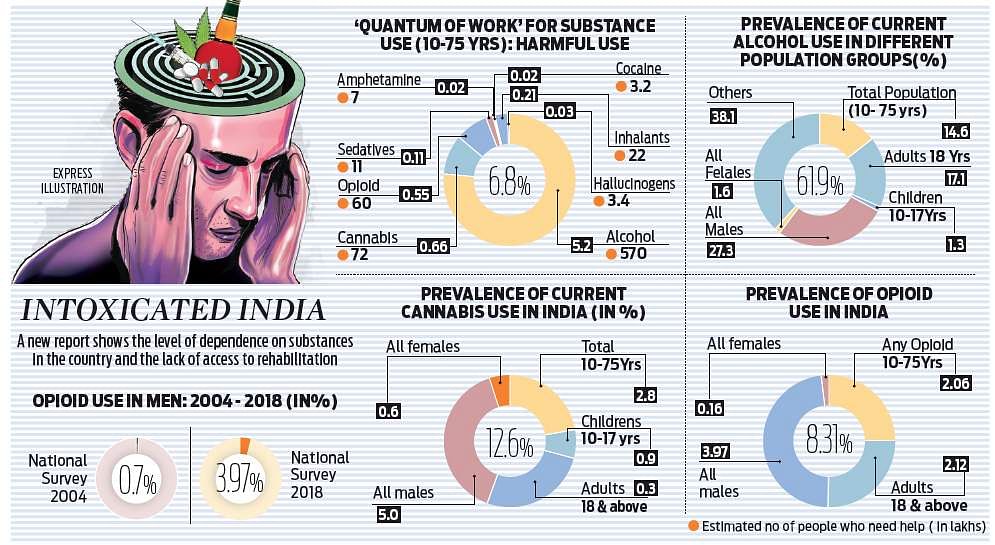 Around 14.6 per cent of the population, between the ages of 10 and 75 (16 crore people) consume alcohol in the country, shows the report with its use being 17 times higher among men than that of women.
Over 5 per cent of those dependent on alcohol need aid for alcohol-related problems. States with the high prevalence of alcohol use are Chattisgarh, Tripura, Punjab, Arunachal Pradesh and Goa.

The study covered over 2 lakh households across 36 states and 186 districts in 2018. A total of over 4.73 lakh people were interviewed.  This is the first such survey to gauge the extent, pattern and trend of substance abuse since the last one published in 2004.

Cannabis was found to be the most abused substance in the country after alcohol with 2.8 per cent (3.1 crore estimated ) of the population using it. Around 72 lakh individuals need help for cannabis dependency and a staggering 60 lakh people need help for opiod use disorders, according to the report.  Use of inhalants was found to be higher among children at 1.17 per cent, it observed.

India needs to boost health infrastructure to address the gap in access to treatment, the report recommends. Addiction treatment programmes focusing on inpatient treatment and enhancing treatment services as outpatient clinics and scaling up treatment services for substance use disorders are urgently required, it pointed out. A conducive legal and policy environment will also help control drug problems, added the report.

Stay up to date on all the latest Nation news with The New Indian Express App. Download now
(Get the news that matters from New Indian Express on WhatsApp. Click this link and hit 'Click to Subscribe'. Follow the instructions after that.)
TAGS
Alcoholic