In a Facebook post, Pakistani journalist Sehyr Mirza wrote that the challenge is also aimed at expressing solidarity with their Indian friends.

At a time when India is mourning the loss of its brave heroes, a humble initiative by a Pakistani journalist is going viral on social media for all the right reasons.

"I am a Pakistani and I condemn Pulwama terrorist attack," reads a placard held by Sehyr Mirza, who has launched the '#AntiHateChallenge' on social media.

Mirza is a peace activist and independent journalist, who has been working on issues related to India-Pakistan relations. Even in the past, she participated in campaigns like 'profile for peace' to counter the negative propaganda.

In a Facebook post, Mirza wrote that the challenge not only seeks to condemn the attack but also to express solidarity with their Indian friends.

"We're deeply disturbed over the tragic terror attack that claimed innocent lives in Kashmir. In such testing times, we need more sane voices to speak out against war and terrorism. We have initiated this #AntiHateChallenge to not only condemn the attack but also express solidarity with our Indian friends," she wrote on Facebook.

She also quoted a poem by the Indian poet Sahir Ludhianvi in her post.

'Whether blood be ours or theirs, It's the blood of humankind.
Whether wars be waged in the east or west, It is the murder of world-peace.
Whether houses be bombed or borders, The temple of the Soul is wounded.
War is a problem itself. How will war resolve problems?
Today it will rain fire and blood, Tomorrow, hunger and scarcity.'

In her post, Mirza requested fellow Pakistanis to join the movement, adding the hashtags #WeStandWithIndia, #NoToWar and #CondemnPulwamaAttack. 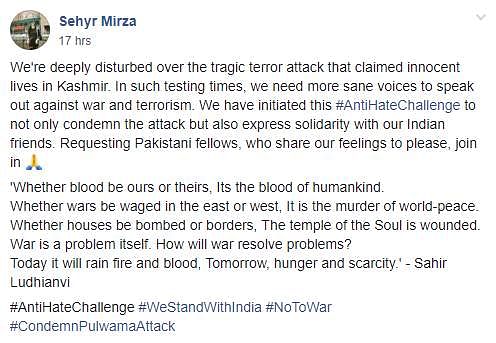 She also shared a picture of her holding the placard on her profile with the caption, "I won't trade humanity for patriotism." She initiated the 'Anti-Hate Challenge' to express solidarity with friends across the border.

In the deadly terror attack in Pulwama, 40 CRPF jawans were killed by a suicide bomber on 14 February. The terror outfit Jaish-e-Mohammed claimed responsibility for the attack. The incident has severely strained Indo-Pak relations.

Wanted to spread a message of love and warmth: Sehyr Mirza

Speaking to Express, Mirza said, "A war-like situation after the Pulwama attack was extremely distressing because of the silence. Peace supporters on both sides were facing a backlash. All sorts of negative and hateful comments were being shared on social media. I thought it was very important to break the silence to create a healing space and the best way to do that was by giving out a message of love and warmth."

She also posted pictures of a few other Pakistani women holding placards with a message condemning the Pulwama attack. While the posts on the #AntiHateChallenge have been widely shared on social media in support of the initiative, Mirza is also getting brickbats from some people for her gesture.

"Hating is very easy and it’s challenging in the current times to stand up for peace. The post is widely being shared and appreciated in India by peace supporters. A lot of love and positive messages are coming in. At the same time, I have faced negative reaction from trolls from both countries," she said.

Responding to the trolls, she said, "While the Indians are calling the photographs fake and disseminating the images with distorted photo-shopped messages, several Pakistanis are responding by calling it an act of appeasement towards the Indian establishment."

Asserting that the pictures posted by her and the spirit of the campaign aren't fake, she said that people who consider it as appeasement or acceptance of guilt must realise how Pakistanis were being attacked and labelled as terrorists.

"I was distressed and wanted to counter that by giving out a public message that Pakistanis are against terrorism and Pakistanis and Indians stand together in fighting the menace," she concluded.