Pulwama fallout: Spike in airfare for Srinagar flights amid harassment of Kashmiris across country

Airfares of Srinagar-bound flights have skyrocketed amidst reports of attacks and harassment of Kashmiris in many parts of the country.

NEW DELHI: Airfares of Srinagar-bound flights have skyrocketed amidst reports of attacks and harassment of Kashmiris in many parts of the country.

Flights from major cities, including Mumbai, Chennai, Kolkata and Lucknow, to Srinagar cost as much as Rs 70,000 for one person on February 19.

There have been reports of attacks against Kashmiris, particularly students, after the Pulwama terror strike. On Saturday, a mob gathered at a hostel in Dehradun where Kashmiri girls were living, prompting police deployment.

A day earlier, several male Kashmiri students were targeted at their rented homes.

In Ambala, a village panchayat asked villagers to evict Kashmiri students living in rented accommodation within 24 hours, according to social media. 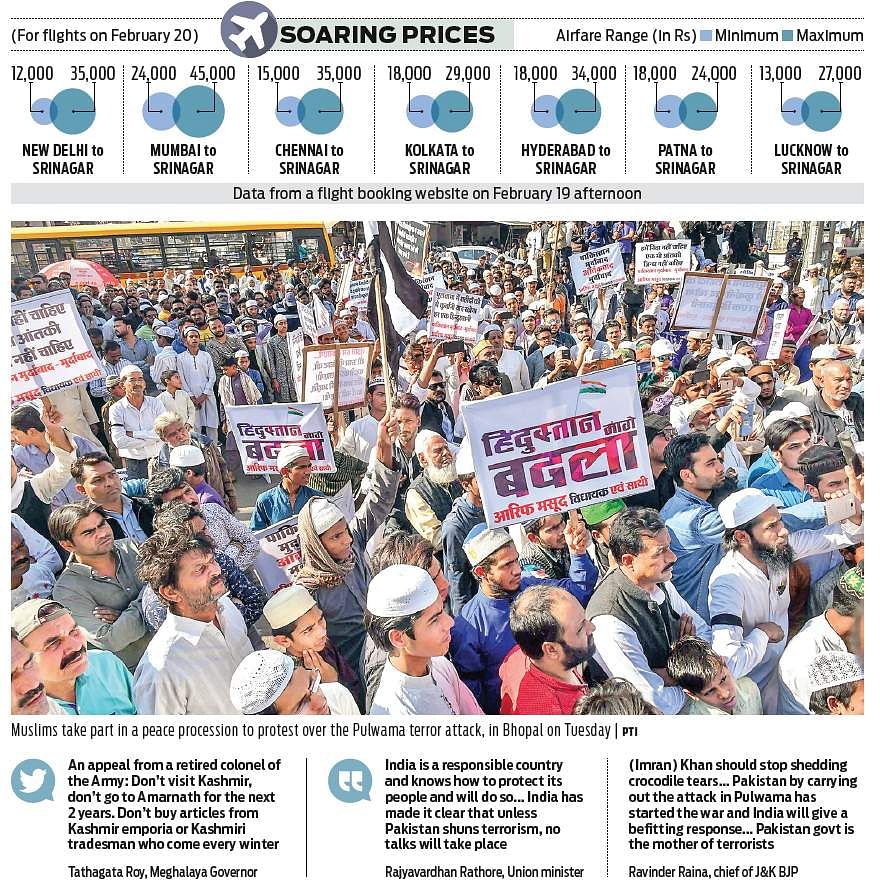 The airfare trend also disclosed that certain pockets have a concentration of people belonging to J&K. Like, flights from Chandigarh to Srinagar cost between Rs 12,000 and Rs 22,000 on February 20.

Similarly, airfares from Mumbai to Srinagar varied between Rs 24,000 and Rs 45,000 for Wednesday suggesting a higher concentration of Kashmiris in Mumbai region.

This is not the first time that airfares have spiraled during a crisis. Airfares had shot up during the deadly 2015 Tamil Nadu cyclone and had touched Rs 35,000. A similar spike was witnessed during the Kerala floods last year.

An official of the Ministry of Civil Aviation said that according to prevailing regulations, airfares are neither established nor regulated by the government. Under the provision, every air transport engaged in scheduled air services are required to establish tariff taking into account all factors.

Stay up to date on all the latest Nation news with The New Indian Express App. Download now
(Get the news that matters from New Indian Express on WhatsApp. Click this link and hit 'Click to Subscribe'. Follow the instructions after that.)
TAGS
Pulwama Terror Attack Pulwama Attack Srinagar Flight Charges