The Satpathy-led panel also took into account the nutritional need for every household while estimating the national minimum wages.

NEW DELHI: The expert panel, set up by the Union ministry of labour and employment to determine the national minimum wage, has estimated the amount to be Rs 375 per day and Rs 9,750 per month.
The panel, led by fellow at the VV Giri National Labour Institute Dr Anoop Satpathy, was constituted in January 2017 by the ministry. “...the report has recommended to fix the need-based national minimum wage for India at Rs 375 per day or Rs 9,750 per month as of July 2018, irrespective of sectors, skills, occupations and rural-urban locations for a family comprising 3.6 consumption unit.

It has also recommended introducing an additional house rent allowance (city compensatory allowance), averaging up to Rs 55 per day, ie, Rs 1,430 per month for urban workers over and above the NMW,” the ministry said.

Apart from setting the national minimum wage, the committee has also estimated minimum wages for different geographical locations in the country. The panel divided the country into five regions for the same. The first region comprised Assam, Jharkhand, Madhya Pradesh, Odisha, Uttar Pradesh and West Bengal while the second region had Andhra Pradesh, Telangana, Chhattisgarh, Rajasthan, Jammu and Kashmir and Uttarakhand. All northeastern states made up region five while Delhi, Goa, Haryana, Himachal Pradesh and Punjab made up region four.

The panel also recommended setting up a research unit in the labour ministry to act as an advisory board to the state and national labour units. 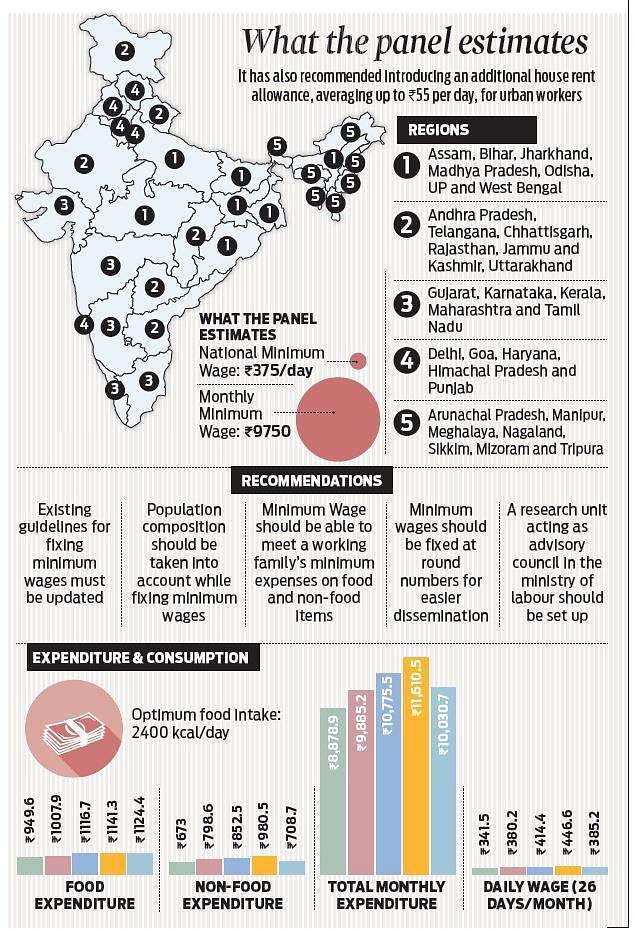 Stay up to date on all the latest Nation news with The New Indian Express App. Download now
(Get the news that matters from New Indian Express on WhatsApp. Click this link and hit 'Click to Subscribe'. Follow the instructions after that.)
TAGS
national minimum wage Rs 375 per day